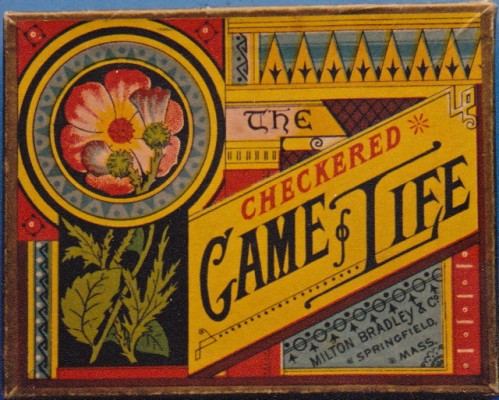 As the Nickerson and Fisher families looked forward to their holiday seasons, they and other Gilded Age families would have enjoyed games, toys and books in their spare time.

Post-Civil War America was a time of rapid economic growth; the middle class was expanding while industrialization allowed for increased leisure time and expendable income.  Middle and upper class children enjoyed play time, and new books, toys and games were introduced to appeal to children of the era.  Many of which still captivate the young minds of today.

Nathaniel Hawthorne’s 1851 publication A Wonder Book for Girls and Boys marked a change in American children’s literature.  Hawthorne observed his own children at play, seeing how their imaginations shaped their games.  He wanted to write a children’s book that would capture children’s imaginations and inspire them to read outside of school.  He decided to re-write six Greek myths and to incorporate children into the framing narratives.  The book was an immediate success and sparked a new publication trend for popular children’s books.  Authors like Louisa May Alcott, Lewis Carroll, Frances Hodgson Burnett, Rudyard Kipling, and Anna Sewall created stories especially for children.  In 1885, Robert Louis Stevenson published the still beloved A Child’s Garden of Verses, which continued Hawthorne’s focus on children’s imaginative play; Stevenson’s adventure stories like Treasure Island (1881) also sparked children’s imaginations.

Popular children’s games included marbles, checkers, Parcheesi, and cards.  Board games were first introduced in  the early part of the nineteenth century.  Milton Bradley and the Parker Brothers began their companies after the Civil War.  In 1860, Milton Bradley designed and produced the board game Life, which was an immediate success and remains so through the 21st century. George Parker published the first Parker Company/Parker Brothers game catalog in 1885.  Parker Brothers introduced the game Office Boy in 1889.  Similar to Milton Bradley’s Life, Office Boy had players begin as office boys at a company and work at various jobs trying to become head of the firm.  The 1894 Parker Brothers catalog included the World’s Fair Game, sure to be popular with Chicagoans.

A variety of toys were manufactured in Chicago.  The toys reflected Chicago’s reputation as a manufacturing and architectural center.  Tootsietoys may have been the most popular, yet unknown, manufacturer of toys in Chicago.  The company created the miniature metal toys found in Cracker Jack boxes.  The Linotype machines used to stamp the toys were originally seen at the World’s Columbian Exposition.  Charles O. Dowst saw the machines being used to stamp metal parts for machines and realized that the same machine could be used to mass produce metal toys.  Some of the toys were miniature versions of the machines or products that Chicago’s factories produced, like cars, trains, and tractors. 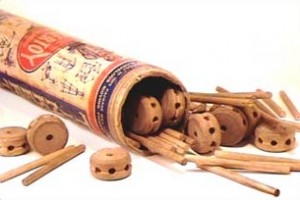 Two of Chicago’s best known toys were made of wood:  Tinkertoys and Lincoln Logs.  Both allow children to build their own versions of skyscrapers and other buildings seen in Chicago.  Charles Pajeau invented Tinkertoys in 1914 in Evanston.  Pajeau was a stone mason by trade and set out to design and market a toy that would inspire the imagination.  John Lloyd Wright, son of Frank Lloyd Wright, invented Lincoln Logs in 1918.  His inspiration for the toy came a few years earlier while visiting Tokyo, Japan with his father.  The young Mr. Wright observed workers building the Imperial Hotel, they used a revolutionary technique of interlocking beams John Wright later used to design Lincoln Logs.