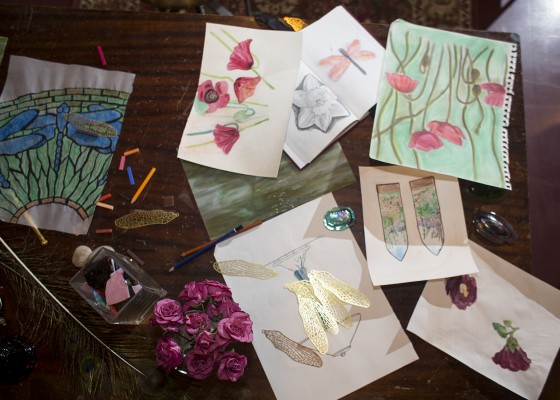 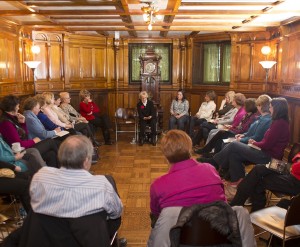 The Tiffany Girls faced their toughest critic since the old master himself during a recent twilight tour at the Driehaus Museum. Susan Vreeland, author of the acclaimed bestselling novel, Clara and Mr. Tiffany, was the featured speaker at the Driehaus Winter Book Club this March. She also gave two lectures at the museum on the Women’s Department at Tiffany Studios. Vreeland provided some valuable insights as she accompanied “Clara Driscoll” and “Agnes Northrop” on a historic reenactment through their temporary studio and showroom in the Nickerson Mansion. 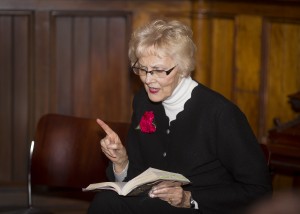 Set in 1899, Clara and Agnes are preparing to enter their designs in the 1900 Exposition Universalle in Paris. Guests on the tour are invited to take roles as potential customers. Ms. Vreeland was handed the part of an English aristocrat and played it rather convincingly. She demanded answers about the techniques used to create the myriad effects associated with the fabrication of Tiffany lamps. Vreeland’s visit to Chicago was timed to coincide with Women’s History Month as well as to tour the exhibition: Louis Comfort Tiffany, Treasures from the Driehaus Collection. In her novel, Vreeland recreates the fin de siecle with its tempestuous labor struggles and the nascent women’s rights movement. Her book describes the strivings of young women artists who found gainful employment in Louis Comfort Tiffany’s New York studios alongside their grudging male counterparts.

“Remember to emphasize that this was a very diverse group of women,” Vreeland advised. “Some of the workers had formal art training while others who showed a certain predilection for the tasks had to be instructed in the selection and cutting of the glass by Clara herself.” “There were many languages spoken and the women represented a range of the immigrant population.” 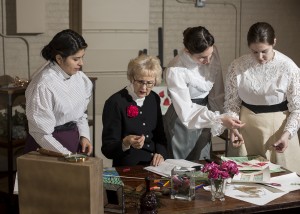 Susan Vreeland with the “Tiffany Girls”

She found the two actresses who portrayed Clara and Agnes to be both charming and very knowledgeable about their respective roles.

Ms. Vreeland read a portion of her novel in Roland Nickerson’s bedroom, pausing at Driscoll’s Wisteria Lamp to deliver a message on beauty and design. Later in an impromptu question and answer session, she fielded queries about her research, writing methods and the plot of her newest novel, Lisette’s List to the group. 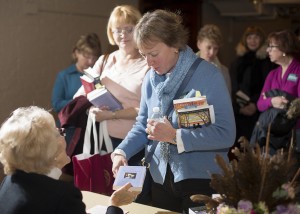 Many questions centered on the betrothal and subsequent disappearance of Clara Driscoll’s second fiancé, social reformer, Edwin Waldo. In the book, the couple travels to Lake Geneva to mark their engagement. Although seemingly happy, Edwin suddenly and mysteriously disappears. He would resurface many years later without explanation. Vreeland speculated that he might have had some form of mental illness. Apparently he would vanish again after relocating to California. But she emphasized his sincere desire to help elevate the status of workers. Clara Driscoll was deeply influenced by his passion for reform. Vreeland suggests that Driscoll adopted some of Waldo’s methods when she marched her female employees arm in arm to storm a picket set up by the Glass Cutter’s Union.

When asked about the details of Edwin and Clara’s relationship, Vreeland replied that this is where researchers hit a wall. She was forced to speculate on the events their honeymoon trip blending what little information there was available with the fiction writer’s art. 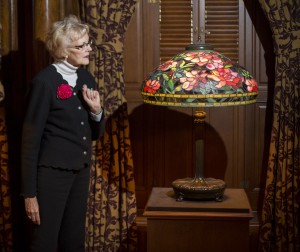 What was her favorite piece in the Driehaus exhibit? She loves the Peony Lamp which is on display in Samuel Nickerson’s bedroom.