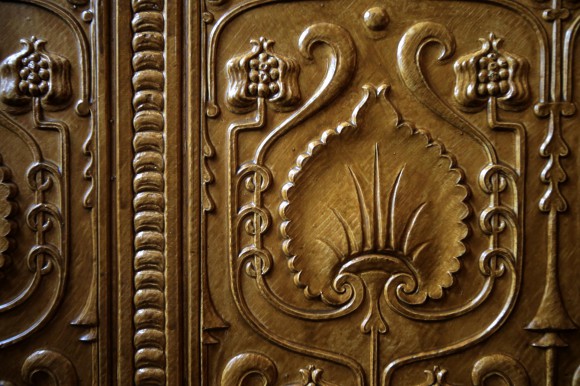 “The Most Perfect and Beautiful of All Wall Decorations”

Standing on the shoulders of the Industrial Revolution, the Gilded Age spawned an astounding number of inventions that profoundly changed life inside the American household. Those last few decades of the 19th  century will always be known as a great era of invention. Thomas Edison invented the electric light bulb and built the first power station; he also gave us the phonograph for listening to music and the kinetoscope for watching motion pictures. Alexander Graham Bell created the telephone. Eastman Kodak produced the first camera for amateurs. Dr. John Pemberton sold the first bottles of Coca-Cola in Atlanta. John Kellogg accidentally discovered flaked cereal and changed American breakfast forever.

Frederick Walton isn’t as famous as Edison or Kellogg, but his defining invention is just as ubiquitous as Frosted Flakes. Walton, an inventor from England, gave the world linoleum.

Walton started his career working with his father and brother in a small family workshop where they manufactured India rubber (natural rubber made from the sap of the rubber tree, and a favored waterproof industrial material).

In 1855, Walton happened to notice the way a used can of oil-based paint would develop a thick, leathery ring around the lid. The flaxseed oil in the paint seemed to slowly oxidize and harden over time. “It occurred to me that…I could use it as a…waterproofing material, similar to [natural] india rubber,” Walton wrote. After figuring out how to fast-track the natural oxidization process by boiling the oil, he began to experiment with the material’s durability, attempting to dissolve the plastic-like oxidized oil in a solvent, or seeing how it took to water, oil, or heat. It was—as you know, if you’ve ever had a linoleum floor—impervious. It was also cheaper than India rubber.

In 1863, Walton took out a patent for the “Improvement of the Manufacture of a Wax Cloth for Floors”. He used straightforward Latin for the name of his new material—flax, also known as linseed (Latin: linum), and oil (Latin: oleum). The ingredients and process he outlined in this and subsequent patents—oxidized linseed oil mixed with coal dust, cork or sawdust and resin, and pressed into sheets with electric rollers—are almost identical to that of 21st-century linoleum. In 1864, Walton launched the Linoleum Manufacturing Company in Staines-Upon-Thames. 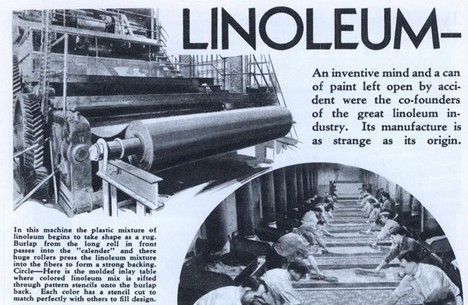 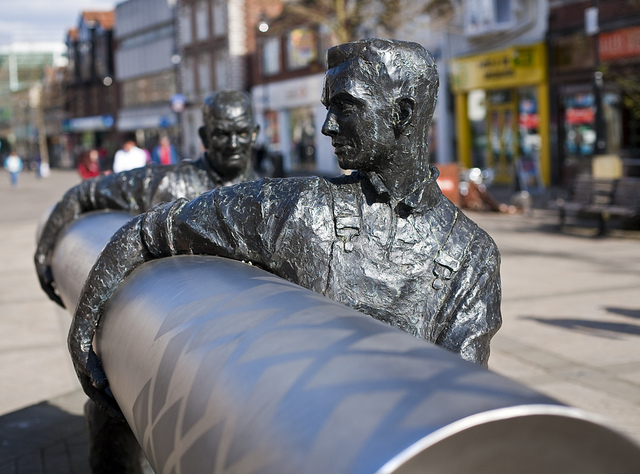 Statue of linoleum workers on the high street of Staines-Upon-Thames, England, commemorating the workers of Walton’s factory. 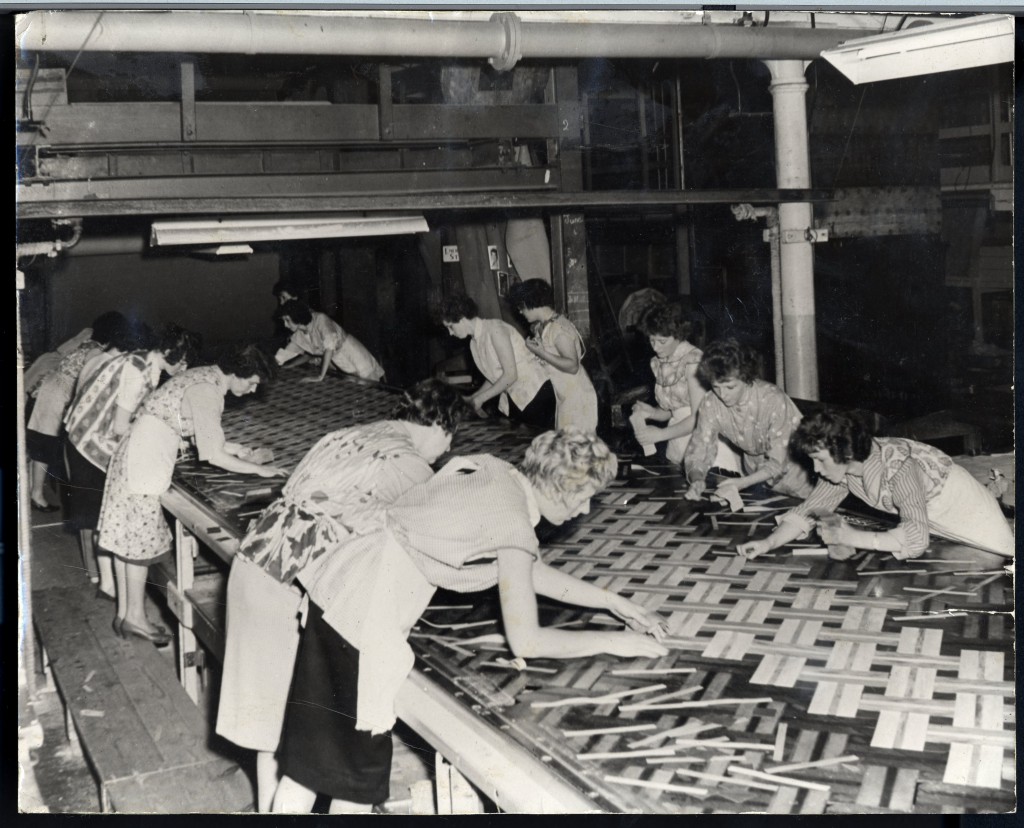 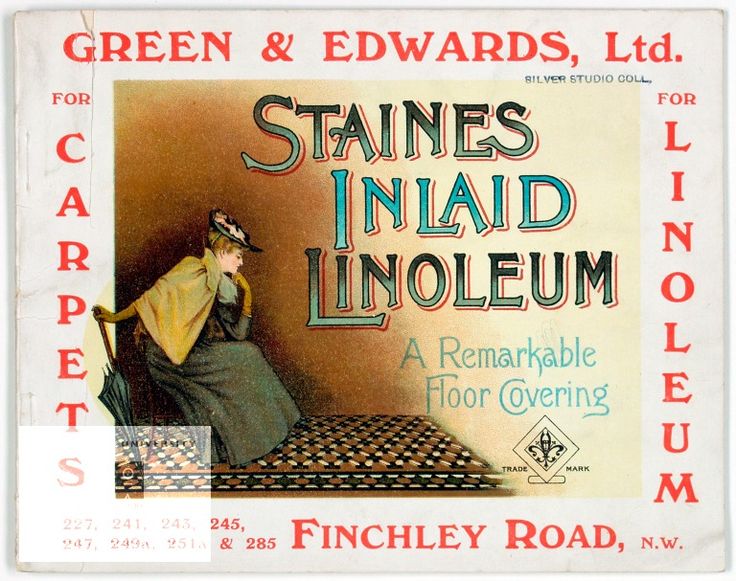 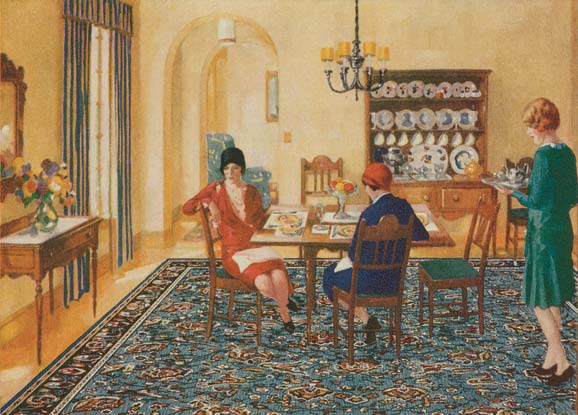 This illustration from the 1920s advertises an attractively painted linoleum rug.

Linoleum became increasingly recognized as an inexpensive and easy-to-clean decorative material for dining rooms, passages, and kitchens. So what was initially meant for commercial and industrial use—protecting factory floors, for example—migrated into European and American households. Subsequent linoleum companies hired artists to paint decorative designs on the flooring surface, eventually integrating pigments in the manufacturing process. Molds and stencils created texture and inlaid patterns for hallways or carpet surrounds, until the material hit the height of popularity as 20th-century kitchen flooring.

Linoleum may have been a practical material, but Lincrusta-Walton would be a beautiful one. Walton patented this material, thinner than linoleum and beautifully sculpted with artistic patterns, in 1877. Again, the term is Latin, lin for linseed oil and crusta for a hardened material like plaster or stucco. 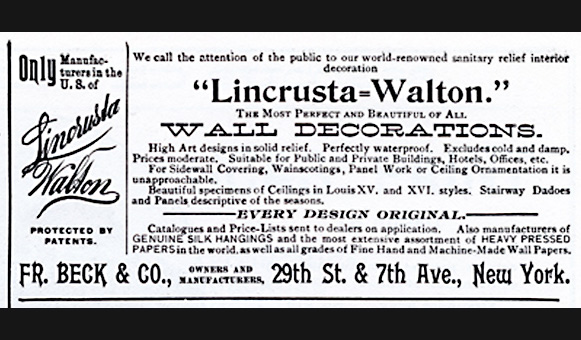 Walton outlined a manufacturing process similar to that of linoleum—oxidized linseed oil  blended with wood fiber, gum, resin, and paraffin wax and spread onto a canvas or paper backing. But once embossed by rollers and skillfully painted after installation, this new material could pose as hand-tooled leather, repoussé metal, carved wood, or ornate plasterwork—all coveted top-end home finishes during the Gilded Age. (Business-minded Walton was well aware from the beginning of Lincrusta’s copy-cat abilities; the first patterns he designed were imitations of Cordovan leather, a Renaissance mark of prestige.) Lincrusta was far less expensive than what it imitated, and as a new middle class of Americans with disposable income began to design and build grand homes in New York, Boston, and Chicago, provided an expanded palette for interiors striving for extravagance. By 1885, Beck & Co.—a Connecticut firm licensed by Walton’s firm—offered 150 different patterns of Lincrusta inspired by Egyptian, Greek, Persian, Moorish, Japanese, Medieval, Renaissance, Louis XIV, and Eastlake motifs. 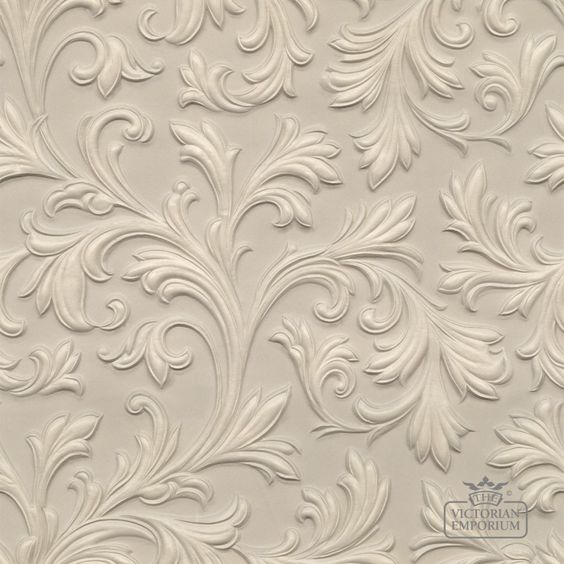 Lincrusta would be (and is still today) purchased unpainted in an embossed pattern, such as this one featuring  acanthus leaves. 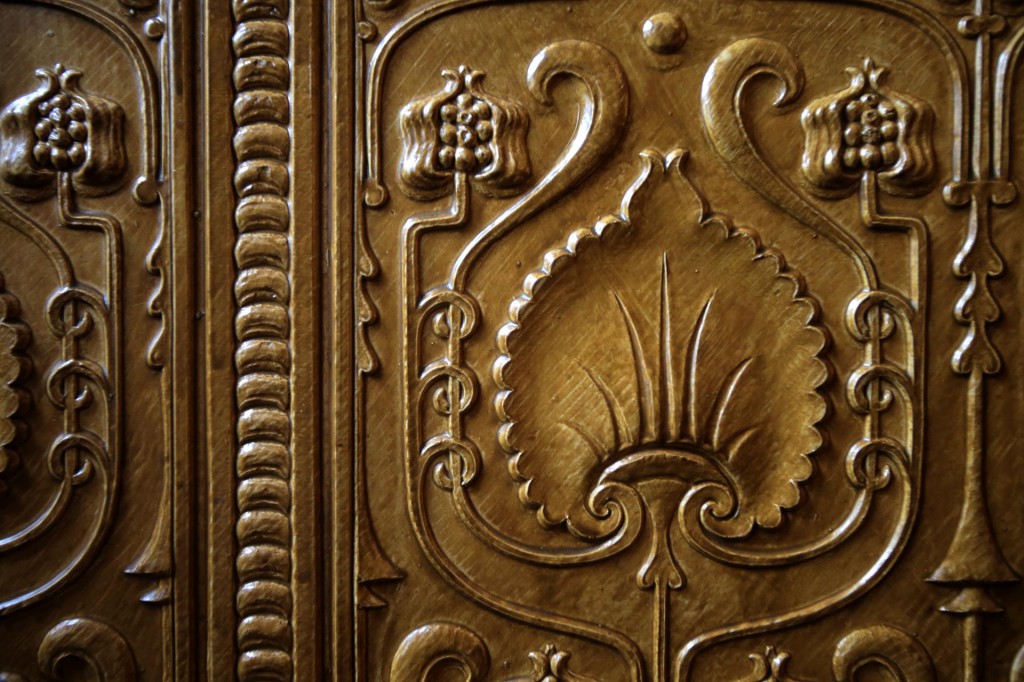 Lincrusta wainscoting painted to resemble wood in an 1890 Boston home.

Lincrusta lost none of the practical applications it shared with linoleum, however, and advertisements called it the “indestructible wallcovering.” Indeed, it proved waterproof, easy to clean, insect-resistant, and less prone to warping or cracking over time. Decorators and tastemakers enthusiastically recommended Lincrusta be applied to walls as dados, fills, and friezes.

Lincrusta at the Driehaus Museum 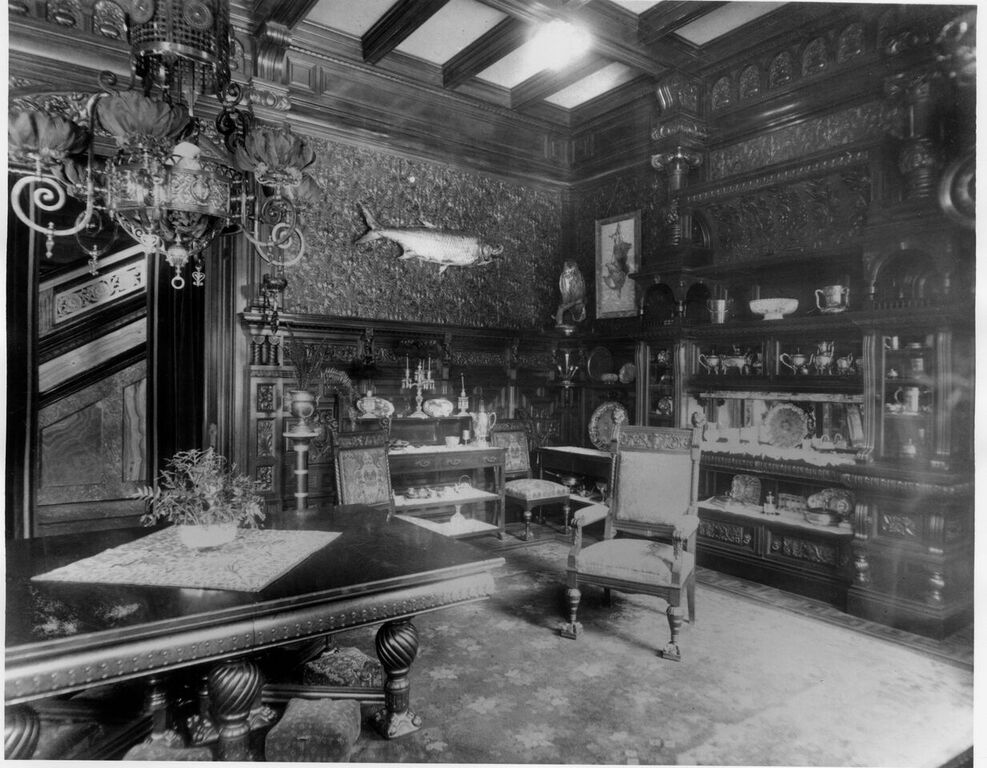 The Dining Room of the Nickerson Mansion (Fisher Period, ca. 1900).

For their new mansion in 1883, the Nickersons blended the latest in building technologies, such as fireproofing and indoor plumbing, with the latest in fashionable interior design.  Lincrusta featured prominently in the Dining Room and Smoking Room of the residence. In the Dining Room, the wall fill above the elaborately carved oak wainscoting emulates Spanish leather. Its design—embossed and scrolling leaves, painted burgundy and highlighted with gold by master artisans on-site—is inspired by the Renaissance. In the Smoking Room, the Lincrusta frieze featured a Japanesque pattern of red, black, and gold chrysanthemums. 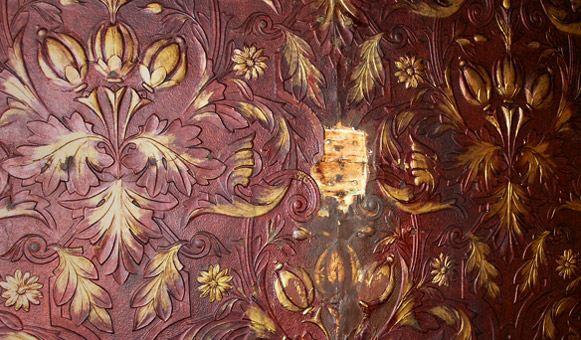 When restoration of the Nickerson Mansion commenced in 2004, the Lincrusta in the Dining Room showed damage from objects hung on the walls, including framed paintings and stuffed animal heads. 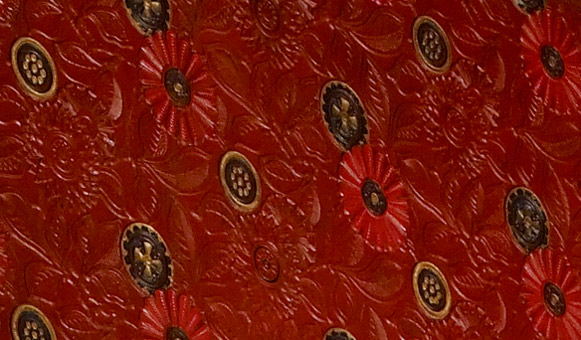 Detail of the Japanesque chrysanthemum pattern on the Lincrusta upper frieze in the Nickerson Mansion Smoking Room.

During the 2004-08 restoration of the Samuel M. Nickerson Mansion, conservators found the Lincrusta had survived. But a hundred years’ worth of grime, salt, and nicotine stained its surface, and decorations (the Nickersons hung paintings, and the mansion’s second owners, the Fishers, displayed stuffed animal heads on the walls) had damaged it further. Late 19th-century advertisers had perhaps exaggerated Lincrusta’s strength; the material is actually more brittle and delicate than the hard materials it emulated. Care needed to be taken with cleaning so as not to damage it further. Parma Conservation, a Chicago firm, designed a unique solution to meticulously lift the grime without damaging the painted surface. Fill for missing areas was cast from molds taken from the intact Lincrusta, then painted to match. Today, the Lincrusta is luminous, complementing the sheen of the beautifully restored wood paneling in both rooms, as it did in 1883. 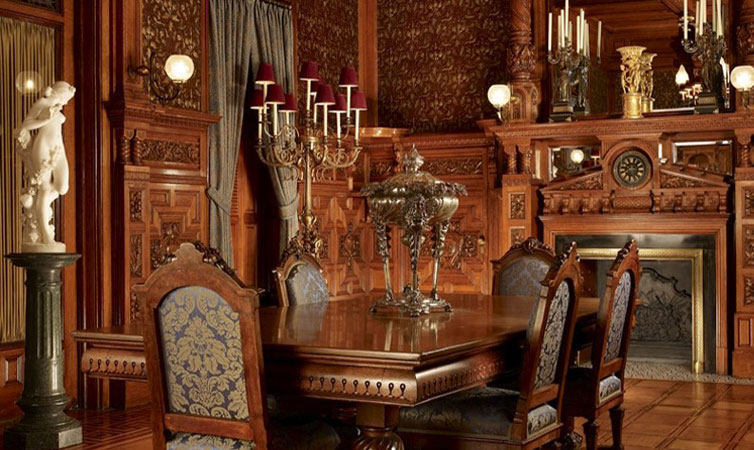 The Dining Room of the Nickerson Mansion after restoration.

“Take one step inside the Nickerson Mansion and its splendor is obvious. Yet behind every architectural detail there are hidden stories. They are the stories of the craftsmen and artisans who created the carved mantles, tiled mosaics, scrolled marble capitals, and elaborately painted decorative schemes on the walls and ceilings within the house. It would be almost impossible today to find artisans capable of producing such exquisite details—the necessary skills are all but extinct.”  (Peter Schoenmann, Head Conservator of Paintings and Murals, Parma Conservation)