Spring has come to Chicago—and to the Chicago gallery of our latest exhibition, Maker & Muse: Women and Early Twentieth Century Art Jewelry. A silver tiara, adorned with a spray of springtime lilacs, leaves, and vines, heralded the new season when it arrived at the Driehaus Museum this week.

The elegant circlet is repossé silver, crafted from melted silver spoons donated by the women of Lombard, Illinois, in 1930. It was created as a symbol of Lilac Time, the annual springtime celebration in this west-suburban village. The crown adorned the first Lilac Festival Queen—whose name and the names of several other early Queens are etched in the crown’s interior—and continues to be an integral part of the festivities today. 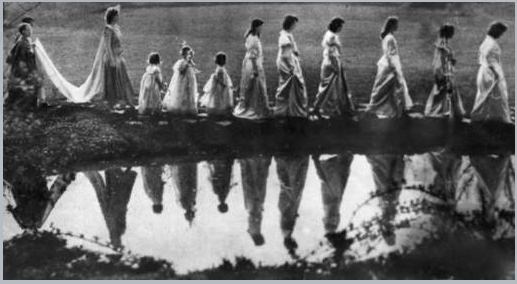 It’s also a late commission from artist and designer Christia M. Reade. Reade’s heyday was right at the turn of the century in Chicago, when the ideas from the Arts and Crafts Movement, having drifted over from England, took root here and bred a unique regional movement of its own. Arts and Crafts was about the artisanal talents of makers, and they weren’t shy about showing off asymmetry, unfaceted semiprecious stones, minute imperfections, and common metals—all indications of items made by hand in a studio, rather than by machine. Nature, as you can see in the Lilac crown, was chief among Arts and Crafts inspirations, often depicted in a freeform, romantic, medieval way.

Reade was the daughter of Josiah and Christia Reade; her father was a Chicago native, her mother a New York schoolteacher. Reade studied at the School of the Art Institute in Chicago, and soon became one of the city’s biggest names associated with the Arts and Crafts movement here. She achieved prominence as a principal designer of the Krayle Company, a domestic decorative arts firm with its office in the Marshall Field Building. Her ambitions took her to study in Paris for two years, probably under the artist Luc-Olivier Merson. When she returned from Europe, Reade opened her own studio at 211 Wabash Avenue, which she maintained until the 1920s.

Near Reade’s crown in the Chicago gallery you’ll see other stunning works of jewelry from the same period, many of them made by her female contemporaries. These include Clara Barck Welles, founder of Kalo Shop. She and Reade were fellow graduate of the Art Institute, and are listed as co-jurors on the committee selecting works for the Art Institute’s first annual exhibition of “Original Designs for Decorations and Examples of Art Crafts Having Distinct Artistic Merit” in 1902–03. (This was, incidentally, also a time when Samuel M. Nickerson was still a trustee of this institution.)

The February 1897 issue of The Decorator and Furnisher devoted a spread to “Miss Christina M. Reade, and Her Work.”

“The woman decorator of today is a well established institution. She demands—and receives—full and due recognition for her work, not because she is a woman, but because her work is as a rule meritorious, and deserving of notice. She has had much to struggle against in the way of popular prejudice, but in spite of adverse criticism she has worked her way steadily to the front in a field hitherto conceded to man alone. We refer to her as a coalition; but from this great and growing unit we take pleasure in selecting the work of Miss Christina M. Reade of Chicago as excellent examples of artistic work…”

Reade was best known for her metalwork, but commanded a range of media and exhibited throughout the Midwest. To the same Art Institute exhibition in 1902–3, for example, she submitted a carved walnut bellows, mahogany book rack, copper mounting for a leather bag, copper lock with plates and hinge ornaments, an oak screen with copper panels, and copper buckles, brooches, and cloak buttons set with semiprecious stones like opal, malachite, and amber. She also designed metal lampshades. In The House Beautiful (Volume XI, 1901–1902), a “pierced brass” shade designed by “Miss Christia M. Reade, of the Krayle Company,” was recommended by the publication for one reader’s library drop light.

Reade would have been around 70 years old when she designed the Lilac crown for her hometown of Lombard, but it is filled with the same Renaissance simplicity that imbued her early work. The geometric Art Deco movement may have prevailed in 1930, but in Reade’s world, the romance of nature and the rustic beauty of a perfectly handmade object still captivated her.

The Lilac Festival crown is on loan from the Lombard Historical Society and will be on view at the Richard H. Driehaus Museum through February 2016.