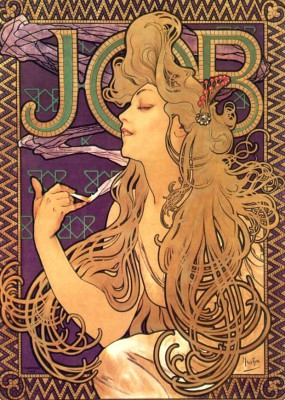 This poster for Joseph Bardou Company, or JOB, a Parisian manufacturer of cigarette papers, unabashedly celebrates the sensuous delights of smoking. The young woman’s eyes are closed with pleasure as the lighted cigarette sends a smoky arabesque curving around the image. Her hair cascades around her shoulders and arms, dominating the picture frame. Her white dress, low-cut and gently loose around her body, communicates a freedom only a few women would have enjoyed in the 1890s.

The poster designer, Alphonse Mucha, was a Czech-born artist in his late 30s. He moved to Paris in 1887 seeking fame. There he mastered French Art Nouveau, an avant-garde style that stretched and elongated decorative lines and text into sinouous, vine-like tendrils that seem straight out of a fairy tale. In Mucha’s posters of women—from big-star performers like Sara Bernhardt to imaginary parisiennes—he often applied that Art Nouveau style to their wild, flowing, abundant tresses. These glamorous, larger-than-life posters helped define the place of the female in advertising in the industry’s earliest days.

Job is probably one of Mucha’s best known advertising posters. And it was radical at the time in its depiction of this glamorous woman enjoying freely an activity once reserved for men alone.

There is plenty of evidence that in ancient times, women might have smoked as openly as men. Tobacco was an integral part of Mayan religious rituals, for example. But sometime between then and the 17th century, female smokers in France, Britain, and America came to be seen as, at best, backwards or socially deviant, and at worst, vulgar and immoral. Appalachian mountain women, Breton peasants, or lower-class prostitutes smoked pipes; uneducated factory workers used snuff; and eccentric Bohemians smoked little cigars. In reaction to these stereotypes, a widespread social attitude dictated that respectable women shouldn’t dare associate themselves, however indirectly, with this supposedly unladylike activity. Wild claims about smoking abounded—it gave women mustaches, some said; it made them go insane; said others. In some American school districts, female teachers could be fired for smoking, while no such prohibition existed for men. In 1908, New York passed a law outright prohibiting women from smoking in public.

Women who did smoke—or wore pants, or worked, or rode bicycles—were satirized in cartoons in France and America as the ‘femmes nouvelles,’ or new women. It wasn’t a compliment. These women were breaking down boundaries that held rigid ideas of masculinity and femininity in place, and not everyone welcomed these bold changes. 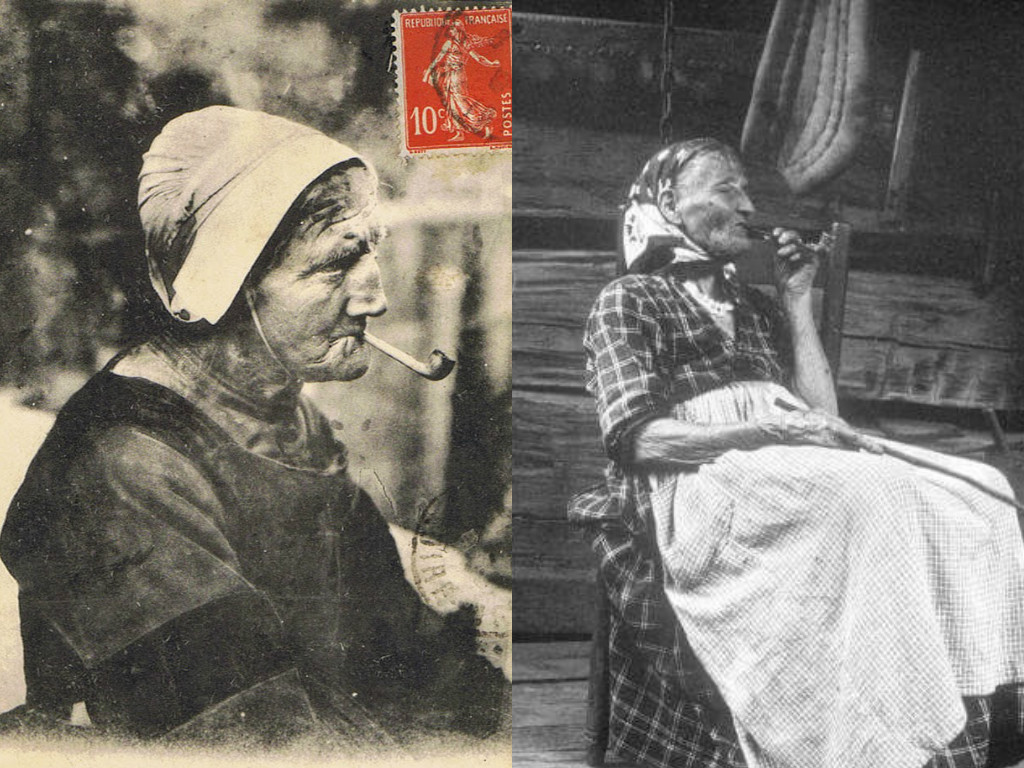 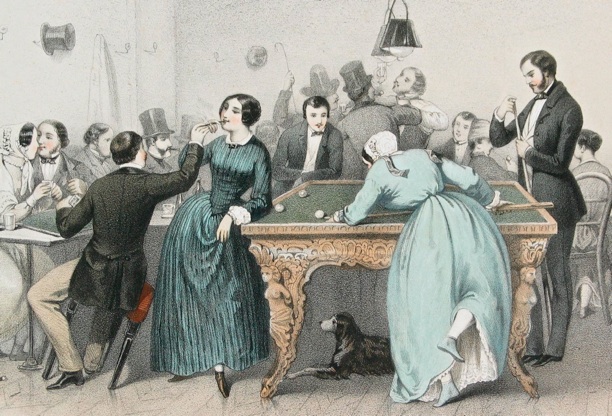 French lithograph (1840) showing women playing billiards and smoking with men. Based on the time period, this image would indicate they are prostitutes or morally loose women. 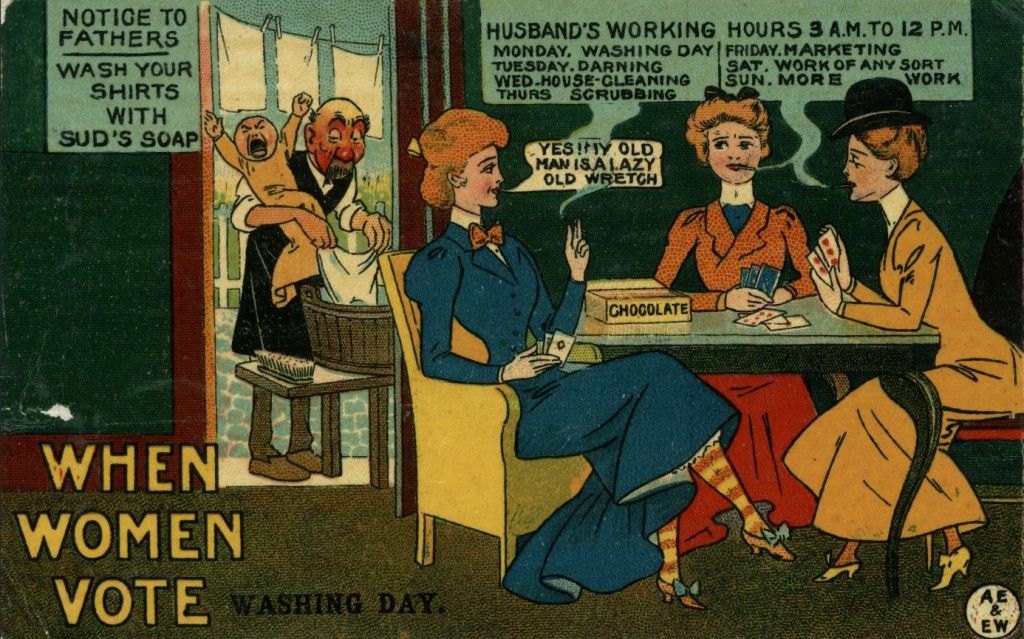 Satirical cartoons about women smoking often indicated a deeper fear about gender roles. Here, a man does laundry while caring for the baby, while his wife and other women women smoke, play cards, and discuss the workday ahead. 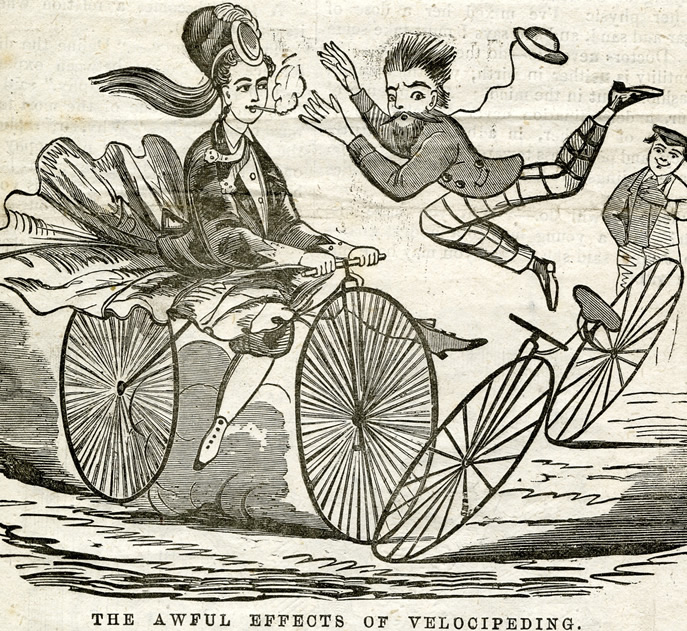 Cartoon from the 1890s showing a bohemian woman riding a bicycle and smoking a cigarette, wreaking havoc. The sentiment is that women would not be able to handle the same freedoms as men, and would endanger society.

But in Job, Alphonse Mucha makes smoking seem—well, sexy. This is no old-fashioned rural woman puffing on a little pipe, but an illustrious beauty enjoying a rebellious pleasure. In the early years of the 20th century, when women began agitating for equal rights, smoking—a male activity heretofore held back from women—became a way to subvert those oppressive social norms. By the 1920s smoking was seen as a chic, enlightened activity claimed by independent women who loved to socialize, dance in clubs, and enjoy their freedoms.

Other advertisements and photographs appeared around the same time, many of which were ushered along by a burgeoning tobacco industry that saw women as an untapped market with great potential. These helped continue to transform the smoking taboo into an act that proclaimed your independence, eased stress, and helped you lose weight. In 1929, Lucky Strike Cigarettes hired ten beautiful debutantes to walk, lit cigarettes boldly in hand, in New York’s Easter parade. Others hired famous admirable women, like Amelia Earnhardt, for advertisements. Moves like this followed Mucha’s Job posters in a radical redefining of what smoking could be for women—not deviant, but glamorous.

Another poster for Job cigarette papers by Alphonse Mucha, this one from 1897. 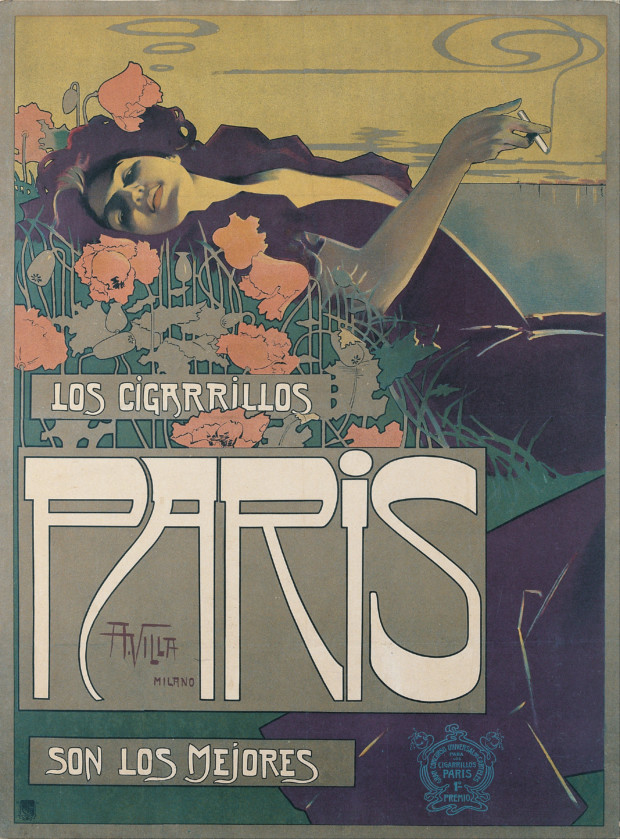 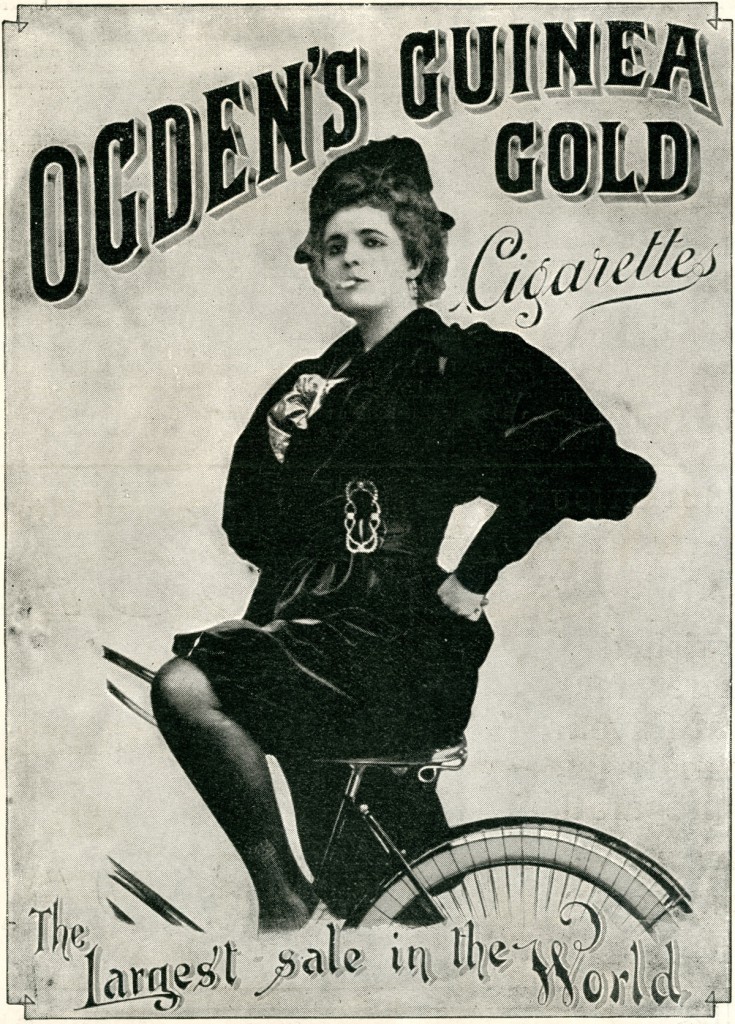 A 1900 advertisement for Ogden’s Guinea Gold Cigarettes, showing a woman on a bicycle in a more positive light. This New Woman is empowered and confident. 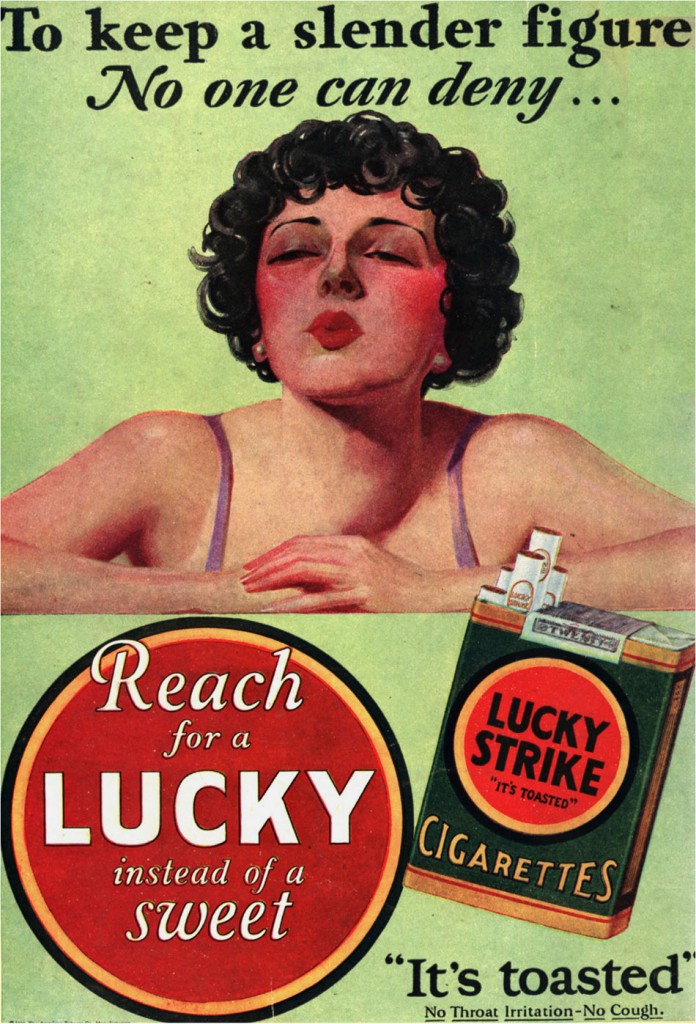 A highly successful 1929 campaign for Lucky Strikes promoted cigarettes as a way to lose weight.

Audrey Hepburn (1929 – 1993) smoking using a long, slender cigarette holder. The actress and icon smoked heavily from the age of 15, and her drinking and smoking habits were seen as part of her sexual allure.

Today, of course, we have a new smoking taboo in our culture. But rather than being based on an arbitrary idea of what is appropriately feminine and masculine, this taboo is based on medical research showing the devastating health effects smoking has on all of us—men and women alike.