In 1853, an event in the world of foreign relations and commercial trade transformed Western art forever: Japan opened its borders. Wares from this once heavily isolated island in the Far East began to flow into Europe for the first time since 1633.

This craze for Japanese art and design became known as Japonisme. The French critic Philippe Burty is said to have coined the term in the early 1870s, a few years after the International Exposition of 1867 in Paris. This was the first world’s fair in which Japan participated with a national pavilion, exhibiting its art to a wider number of people than had previously seen it—about nine million of them, according to attendance figures. 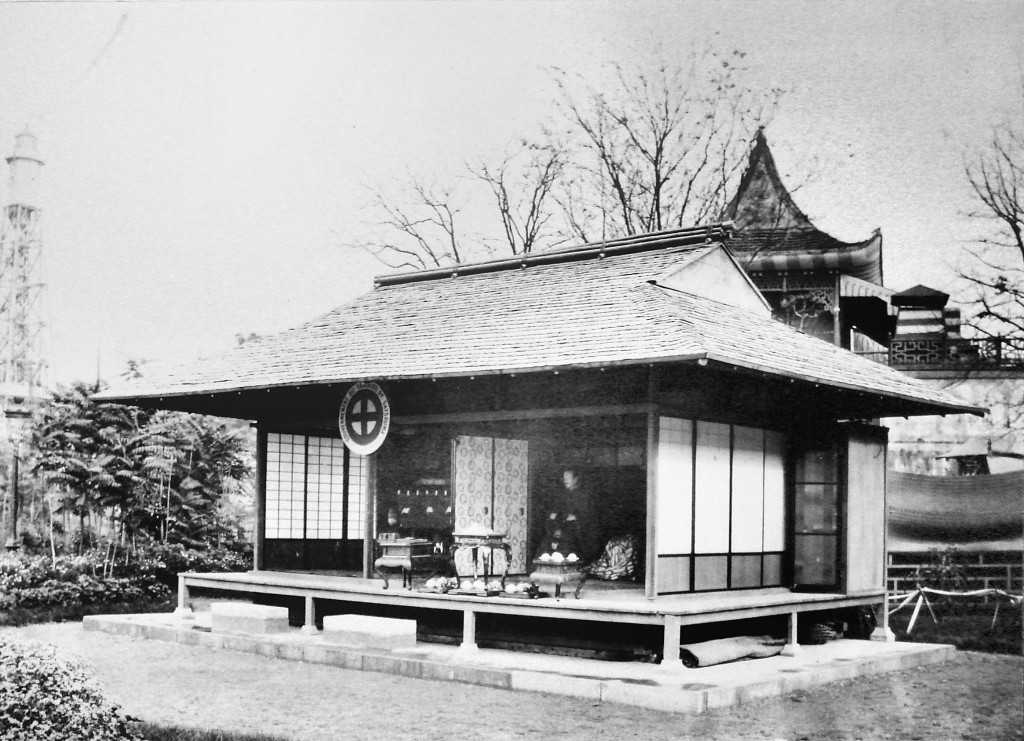 Japanese Satsuma Pavilion at the 1867 International Exposition in Paris. 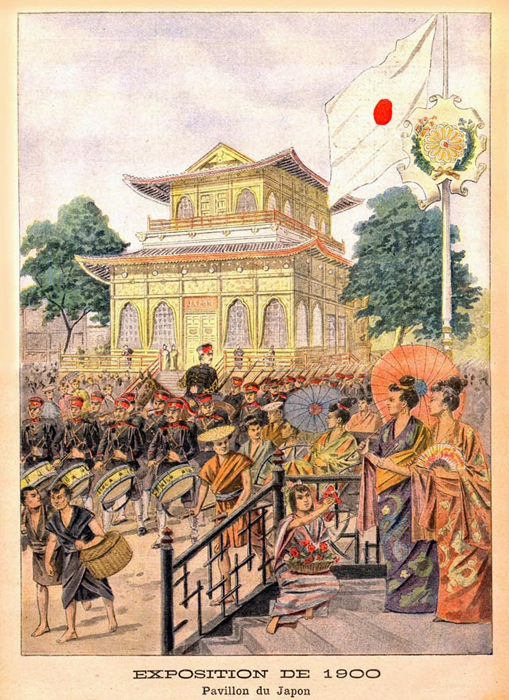 Postcard depicting the Japan Pavilion at the 1900 Exposition Universelle in Paris.

At left, a print by great Japanese ukiyo-e printmaker Ando Hiroshige seems to have provided a reference for American architect Frank Lloyd Wright’s choice to frame his elevation drawing of the Winslow House in River Forest, Illinois, with draping vegetation in 1910. Image via the Smithsonian Magazine. 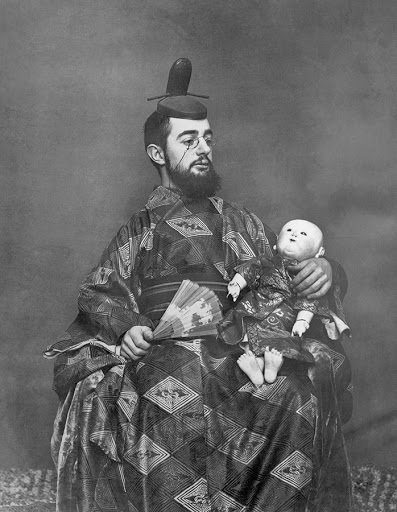 Like many of his contemporaries in Paris, Henri de Toulouse-Lautrec, whose posters are currently on view at the Driehaus Museum in the exhibition L’Affichomania: The Passion for French Posters (through January 7), fell in love with Japanese art and started his own collection of inexpensive ukiyo-e woodblock prints. Flat areas of color, strong outlines, cropped compositions, and asymmetry or oblique angles—all characteristic features of ukiyo-e—began to feature prominently in Lautrec’s posters.

When depicting the performers of Paris’s bohemian Montmartre, Lautrec looked to Japanese kabuki theatre prints for his exaggerated colors, contours, and facial expressions. Kabuki is a kind of classical Japanese drama combining dance, music, and even acrobatics. A kabuki theatre print would portray one actor in full costume and makeup from the play, and audience members clamored to collect their favorites. Neither idealistic nor realistic, these prints revealed, even unflatteringly at times, the performer’s true self just behind the character he played. Likewise in Lautrec’s images of his muse Jane Avril, the avant-garde French dancer he knew well from the Moulin Rouge, we do not see a photographic representation of her looks or performance. Instead, Lautrec focused on the essence of her personality and so-called “explosive” dance style. In one famous poster from 1899 (below), he wraps a multicolored snake around her body, suggesting her sinuous movements.

An example of a kabuki theatre print. Kabuki Actor Ōtani Oniji III as Yakko Edobei in the Play The Colored Reins of a Loving Wife (Koi nyōbō somewake tazuna), by Tōshūsai Sharaku (Japanese, active 1794–95), 1794. The Metropolitan Museum of Art, JP2822. 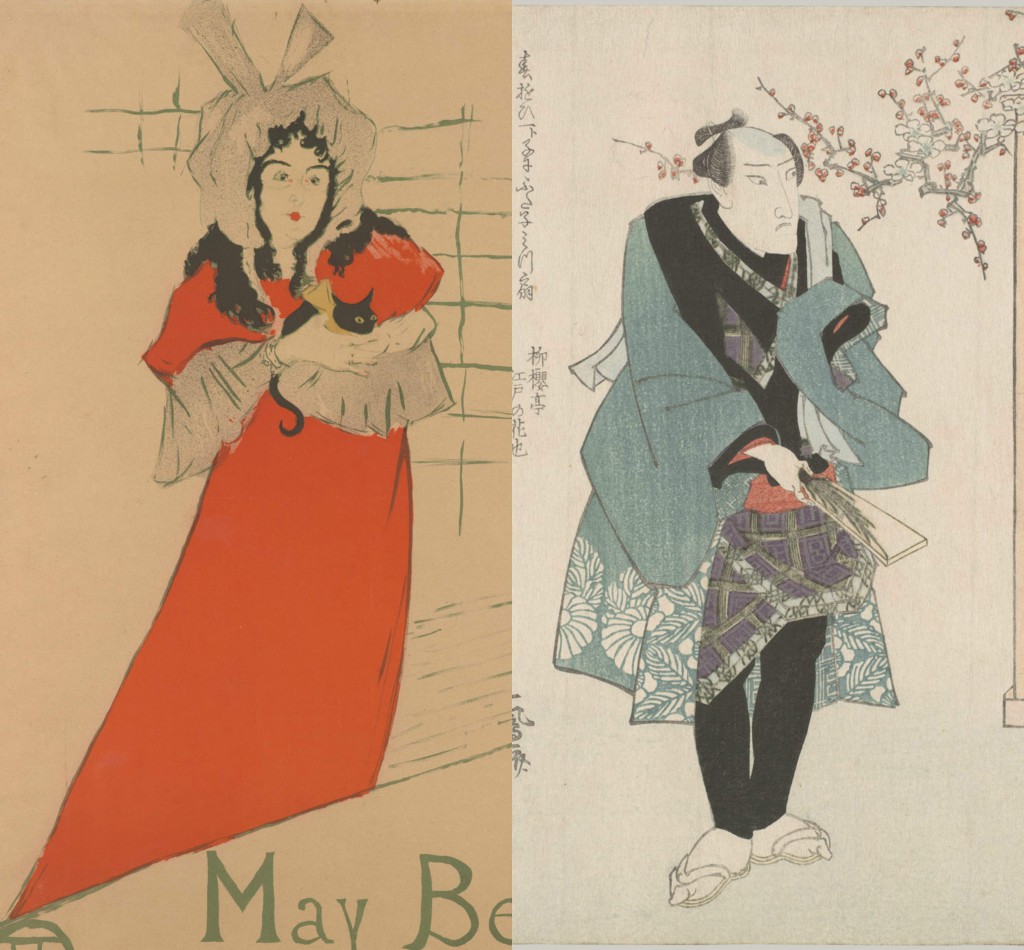 Side-by-side images showing how Henri de Toulouse Lautrec imitated the compositions and postures he found in Japanese kabuki theatre prints. (Left, “May Belfort” by Lautrec, 1895. Right, one print from a series called “Three Kabuki Actors Playing Hanetsuki” by Utagawa Kuniyasu (Japanese, 1794–1834), ca. 1823. Both from the collection of the Metropolitan Museum of Art, 41.12.1 and 2001.715.4a–c.

Japonisme at the Driehaus Museum

The vogue for all things Japanese wasn’t only a European phenomenon. It also reached the United States, influencing great artists, collectors, and tastemakers on both coasts. Here in Chicago in the late 1800s, Samuel and Mathilda Nickerson, the wealthy family who commissioned the mansion that is today the Driehaus Museum, especially favored the Far East in their private art collection. They donated that collection to the Art Institute of Chicago in 1900, the largest gift that museum had received since its founding in 1879, and the catalogue lists 56 Japanese prints and paintings (including works by great ukiyo-e masters Hokusai, Kuniyoshi, Utamaro, and Harunobu), nearly 100 Japanese swords, a Japanese Buddhist shrine, 27 Japanese pipes and pouches, over 100 Japanese carvings in ivory and wood, and nearly 200 pieces of Chinese and Japanese porcelain and pottery (including three stoneware tea caddies, here, here, and here, currently on display in the Art Institute’s Asian galleries). 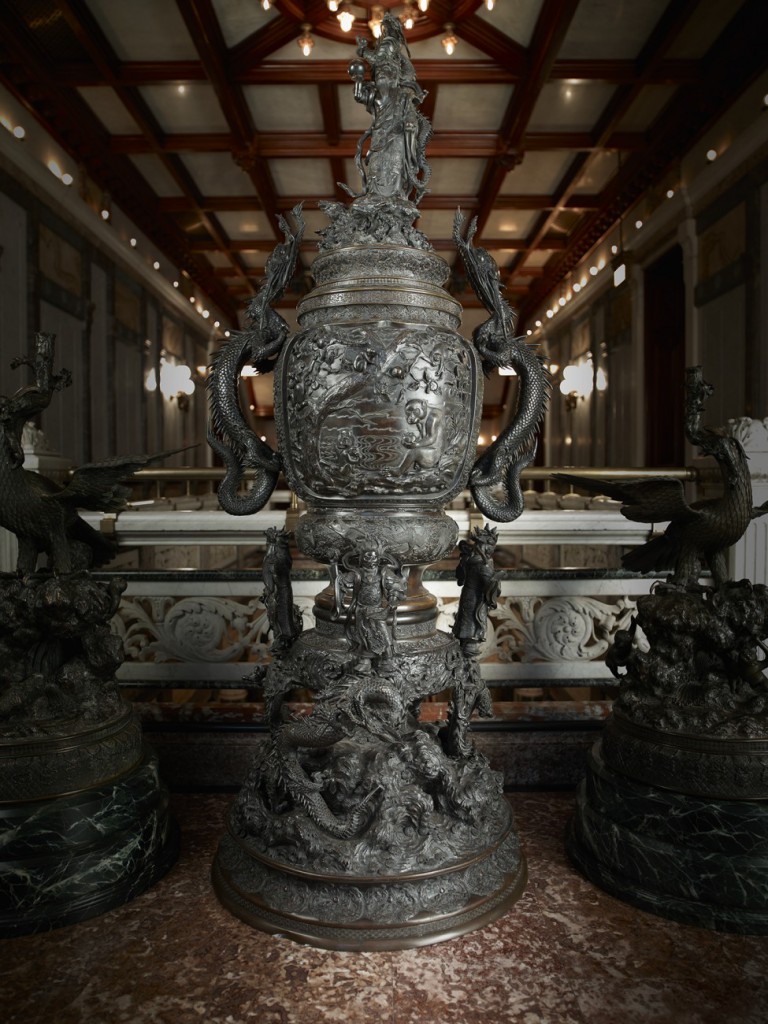 They also incorporated Japanese design in their home. In the Smoking Room of the Nickerson Mansion, as part of an eclectic room design that also features elements from ancient mythology and the Italian Renaissance, a chrysanthemum-studded Lincrusta frieze encircles the upper section of the walls. Painted in rich and exotic shades of red, gold, and black, it mimics the flatness and stylization of Japanese nature patterns. Upstairs, in the Nickersons’ only son Roland’s former bedroom, original English Minton tiles surround the fireplace in a delicate display of flowering cherry blossoms—a classic homage to springtime in Japan.

You can still visit the intimate Smoking Room and Roland’s bedroom at the Driehaus Museum today to see this living testament to the influence of Japanese culture on Gilded Age style. 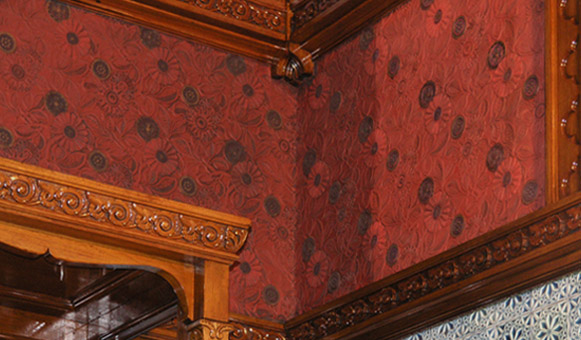 Japanesque Lincrusta frieze in the Smoking Room at the Driehaus Museum.