The Good, the Bad and the Ugly: Nature in Early 20th-Century Art Jewelry

Art, according to John Ruskin, the influential writer of the British Arts and Crafts movement, is most beautiful when its forms are derived from nature.

Now, when we call Nature beautiful, it’s often her finer moments we’re thinking of. A rose, with its velvety bundled petals, is beautiful. So too are the colors of sunset, the splendor of a tree in summer, the simple asymmetry of a starfish, or the spread of a peacock’s tail.

But many art jewelry makers of the early 20th century embraced all kinds of flora and fauna—even the ones that today might be perceived as…well, the opposite of beautiful. Spiders, bats, snakes, frogs, naked branches, and rotting blossoms have all been immortalized in gold, silver, and stone. What some might consider nature’s ‘dark side’ today was actually a source of intrigue and inspiration—the muse of artists all over the world.

That resulted in some striking motifs in these makers’ works, as you’ll see in a number of pieces on view in our current exhibition, Maker & Muse: Women and Early Twentieth Century Art Jewelry. Let’s take a look at a few of them, and stretch the definition of beautiful in the natural world a little further.

Take this pendant featuring a trio of chrysanthemums. In the audio tour of the exhibition, Driehaus Museum founder and collector Richard H. Driehaus explains, “This is one of my favorite pieces in the collection, and by the great René Lalique, whose jewelry has always commanded worldwide attention. You can see how each of the chrysanthemums is in a different stage of its blooming.” A picture-perfect chrysanthemum blossom—with its tight puffball shape composed of tiny petals—doesn’t look exactly like these three flowers Lalique has masterfully carved in glass. Instead, the jeweler chose blossoms that were past their prime. The lower petals are beginning to droop and lose their shape, not quite wilting, but almost. Below the flowers Lalique features a misshapen drop pearl, or “baroque pearl”, which further emphasizes the statement this piece makes that beauty can also be found in imperfection.

Here’s another example by the masterful Lalique, also on view in the French Art Nouveau gallery of Maker & Muse. In the pendant above, he set an aquamarine stone into and below two pairs of spiked, thorny stems of icy-blue enameled gold. Especially when set against the skin of the wearer, the sharp contours of this piece are striking.

Also in about 1900, goldsmith Wilhelm Lucas von Cranach created this fascinating waist clasp in the Art Nouveau style; you can see it on the second floor, in the gallery dedicated to a wide variety of German and Austrian art jewelry. The two grotesque large-mouthed fish grasp the body of the octopus—here, a luminous opal—while simultaneously seeming to be entrapped by the creature’s silver tentacles. In addition to the sinuous symmetry of the fish tails and octopus arms, the German goldsmith has given careful attention to texture. Note the fish scales, elongated fish nostrils, and raised suction cups on the octopus’s curvilinear arms.

Spiders were other favorite themes. This spiderweb pendant was produced in turn-of-the-century London by the Artificers’ Guild, and is on view in the British Arts and Crafts gallery of Maker & Muse. The spiderweb form functions as a seven-pointed locus for a variety of colorful precious and semiprecious stones; the piece includes opal, sapphire, zircon, tourmaline, amethyst, almandine, garnet, moonstone, and pearl. 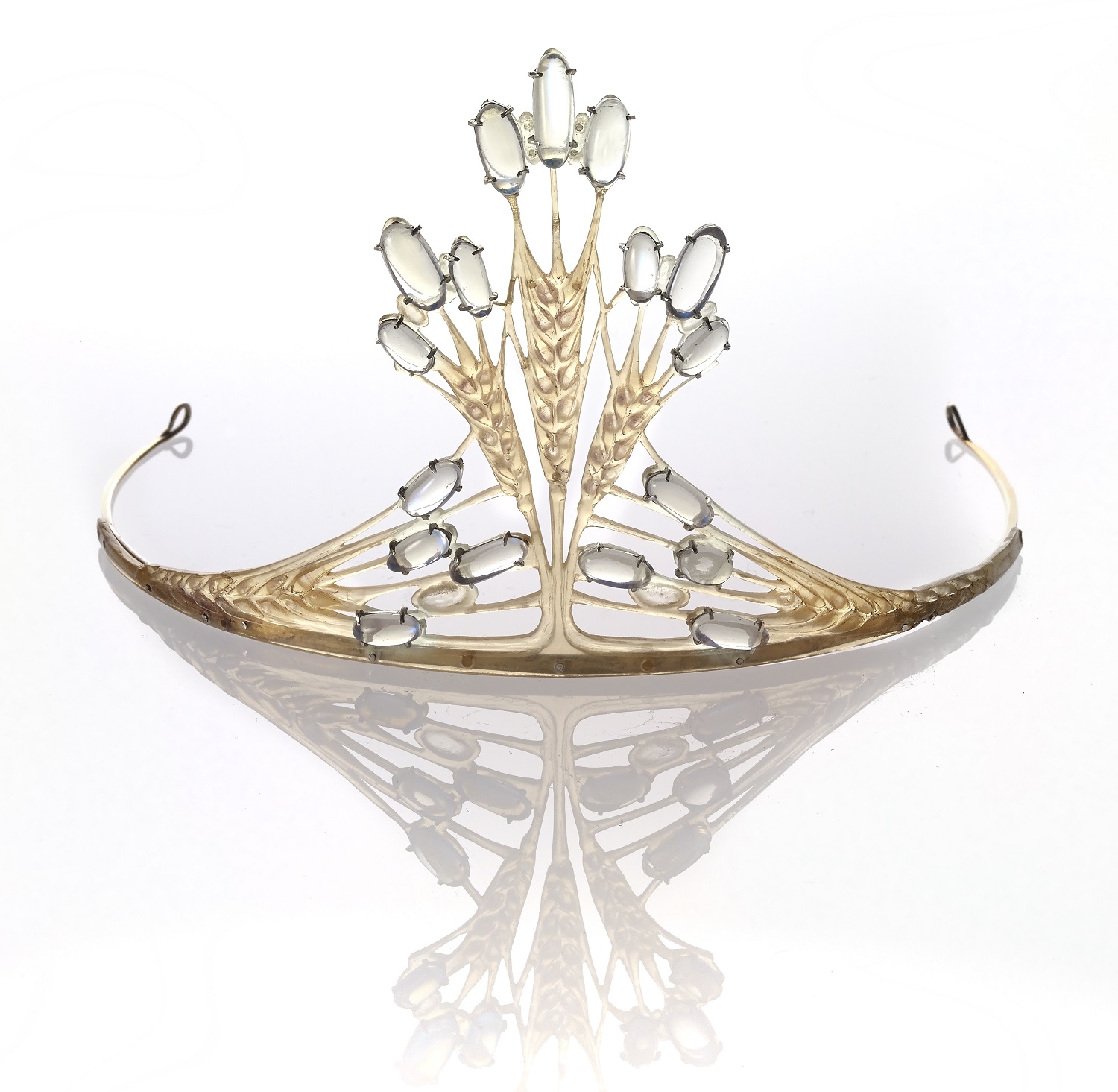 In addition to the creepy-crawly side of nature, art jewelers also made the plain and ordinary into something awe-inspiring. This rare tiara by Fred Partridge, an important early British Arts and Crafts jeweler, is one of the highlights of the exhibition. Sheaves of grain are as humble a part of the natural world as there is to be found, and yet these five cornstalks, of semi-translucent horn topped with moonstones, are transformed into a supremely elegant work of art.

These are just a few of the stunning pieces of art jewelry featured in Maker & Muse: Women and Early Twentieth Century Art Jewelry. There are many more—over 250!—and the exhibition is open through January 3, 2016. Self-guided visits are included in the price of general admission. For more information, visit the Maker & Muse exhibition site. 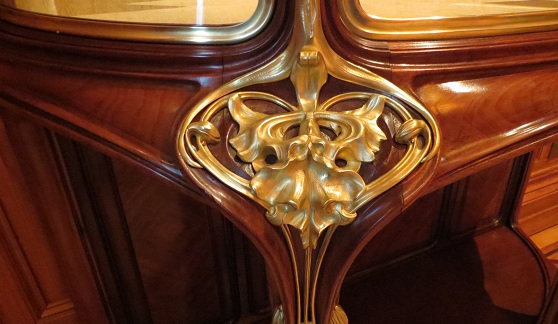 Want to know more about the designer behind the new art nouveau display case at the Driehaus Museum? 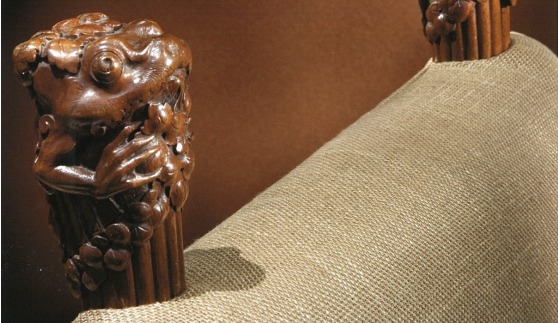 What many people discover when they come to the Driehaus Museum is that Louis Comfort Tiffany and his associated firms designed a great deal more than just lamps.