Puck, Anthony Comstock, & the “Suppression of Vice” in Chicago 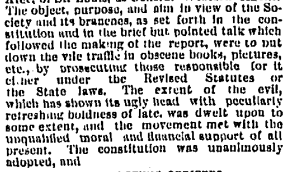 “The object, purpose, and aim in view of the Society and its branches, as set forth in the constitution and in the brief but pointed talk which followed the making of the report, were to put down the vile traffic in obscene books, pictures, etc., by prosecuting those responsible for it either under the Revised Statutes or the State laws. The extent of the evil, which has shown its ugly head with peculiarly refreshing boldness of late, was dwelt upon to some extent, and the movement met with the unqualified moral and financial support of all present. The constitution was unanimously adapted…”

In the southwest corner of the “Social Commentary” Gallery of With a Wink and a Nod there is a small, unassuming cartoon featuring a woman in “a dreadful predicament” and the lurking figure of Anthony Comstock. The cartoon pokes fun at the woman’s hesitation in bending over to tie her shoelace- a rather innocuous activity that she is afraid Comstock will interpret as an action with lascivious intent. In 1873, Congress passed the Comstock Law, which was the first anti-obscenity statute to be adopted at the federal level. In effect, the law made it illegal to send “obscene, lewd or lascivious” materials and information through the mail.

Anthony Comstock was the United States Postal Inspector, which gave him the authority to enforce the Comstock obscenity law. He also became the leader of the New York Society for the Suppression of Vice- and a notorious public figure. He was not just an arbitrator of morality, he had the force of law and order on his side. We may share in Puck’s amusement at the thought of Comstock over-stepping his purview as a regulator of morality, but the Comstock Act did have far-reaching (and even tragic) consequences. Not satisfied with the work being done in his native East Coast, Comstock and the Society for the Suppression of Vice set their sights on Chicago, a city with a notorious reputation.  One of the missions of the Chicago Branch of the Society of the Suppression of Vice was to “prosecut[e] those responsible” for the “vile traffic in obscene books, pictures, etc.” (Chicago Daily Tribune, “Suppression of Vice,” Sept. 27, 1879). 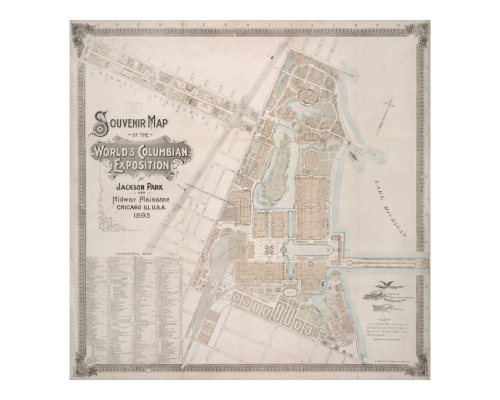 Chicago first drew Comstock’s attention during the 1893 World’s Columbian Exposition, where he was (in particular) horrified by the danse du ventre famously performed by “Little Egypt” at the Egyptian Theater.

While Comstock found so-called belly dancing to be indecent and obscene, author, High Priestess of Yoga, and leader of “peculiar religion” Miss Ida C. Craddock publicly and passionately supported the dance. In fact, Craddock supported many things that Comstock considered indecent- and he prosecuted her to the full extent of the law for “having circulated improper literature through the United States mails” (Chicago Daily Tribune, “Author Ends her Life,” October 18,1902).

Craddock was arrested in Chicago in 1899 and spent time in prison.  Instead of backing down from the expression of her beliefs, she continued to publish literature and speak to the public about sexual education. Comstock personally arrested her again in 1902, and when she was again convicted, Craddock decided to become a martyr for the cause of freedom of expression.

Ida Craddock’s court battles with Anthony Comstock ultimately helped shape the interpretation of the First Amendment, including freedom of speech and freedom of the press. In 1906, Theodore Schroeder, an attorney for the Free Speech League of New York, was set to debate Anthony Comstock at the Purity conference in Chicago. Comstock did not show, but Schroeder spoke on behalf of free speech to the crowd anyway.  Echoing Ida Craddock, Schroeder argued for the “development of healthy mindedness through sexual education” instead of the current suppression of anything deemed “obscene.” (Chicago Daily Tribune, “Purity Debate One-Sided,” October 11, 1906).

“O, dear me, what shall I do? My shoe string has come untied, and there’s that dreadful Anthony Comstock just behind me!”

Anthony Comstock saw Gilded Age cities like Chicago as tarnished, and sought to suppress anything that continued to mar the city’s character. Ida Craddock, on the other hand, seemed to recognize that there was greater danger in suppression than expression. Unlike Puck, which just scoffed at the absurdity of the Comstock Law, she worked to combat it.

For a motion-picture filmed by Thomas Edison of a “belly dancer: https://www.youtube.com/watch?v=zxZoXJBILbc.