**The following was originally published on the Driehaus Museum Blog on Jul 9, 2012, and has been updated for our readers’ enjoyment today.**

John Gardner Low was a ceramics artist of about 41 when he approached the crowded exhibitions in Philadelphia at the 1876 Centennial Exposition. He was a Massachusetts man and had traveled far, like the millions of others, to see the first U.S. world’s fair.

There was no shortage of sights to catch the eye—from Alexander Graham Bell’s telephone to the Statue of Liberty’s just-constructed right arm—but what would inspire Low, who had studied in Paris and worked for the Chelsea Keramic Art Company, were the ceramics on display. American Art Journal would soon after note that the “collection of pottery and porcelain at the International Exhibition surpasses, for educational purposes, anything that can be seen of modern manufacture in any museum” in the U.S. Particularly, it was the highly-decorative European tiles that caught his eye—not intended just for a utilitarian, easy-to-wipe-down fireplace hearth, these pieces were intricately artistic.

Low went home to Chelsea and, with his father John Low, established J. & J. G. Low Art Tile Works the very next year. The tiles they produced were highly decorative, with patterns developed from bits of real nature—grasses, clover leaves, buttercups—impressed onto the clay. When the Lows employed the English artist Arthur Osborne as the firm’s chief designer in 1879, he created bucolic landscapes, mythical scenes, and portraits in the glazed and fired clay, some of which were intended to be hung on the wall as one might a painting.

When Samuel M. Nickerson commissioned his Chicago mansion, Low Art tiles featured prominently. Turquoise tiles in a repeating passionflower vine pattern cover the upper half of the walls in the reception room, the first room any guest would glimpse before being admitted to the house . A more abstract design in a cool, light blue appears in the Moorish tiles on the smoking room walls; the same blue was used in the hearth of Mrs. Nickerson’s bedroom.

On a third floor gallery’s fireplace mantel sits a glazed-tile and gilt bronze clock by J. & J. G. Low, an object from the Driehaus Collection. The art tiles appear in the house’s en suite bathrooms, too. Mr. Nickerson’s bathroom—the Museum’s men’s restroom today—is of particular note for the gorgeous green Low Art tile covering the walls and culminating in an Oriental dragon frieze near the limestone ceiling. 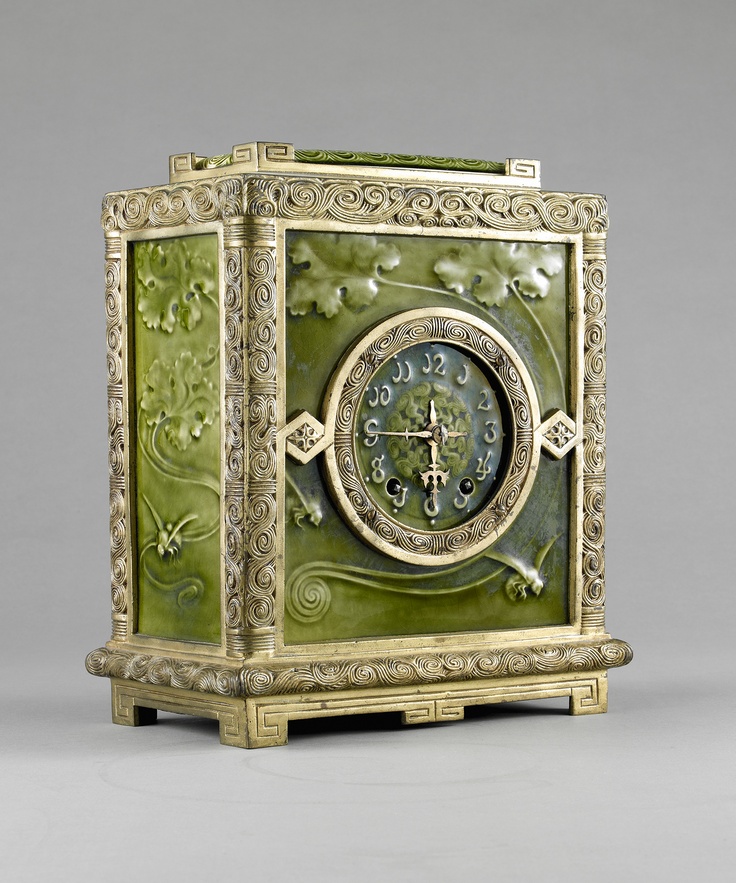 The Low Art Tile Company thrived—mainly on high-end clients like Mr. Nickerson, Gilded Age millionaires for whom it was fashionable to display the jewel-toned, uniquely American art tiles—until shortly after Low’s death in 1907. It is still considered one of America’s greatest 19th and 20th-century tile companies.