Visitors to the Driehaus Museum often cite the gallery as a favorite room with its marvelous stained glass dome and massive wood-burning fireplace. Lined with lacquered cherry bookcases and featuring an iridescent mosaic tile Art Nouveau surround, it is the one room in the mansion that was completely redecorated in 1901 thanks to the second owner, Lucius George Fisher Jr.

Perhaps Fisher wanted to put his own stamp on the Nickerson’s distinctive décor? Or did he just want a grand showcase for his collection of rare books and hunting memorabilia? Whatever his reasons, he hired one of the great Prairie School architects of the day, George Washington Maher.

Maher was born in Mill Creek, West Virginia in 1864. But by the age of thirteen he was living in Chicago and apprenticed to the architectural firm of Bauer and Hill. Thanks to the Fire of 1871, Chicago had become a center for innovative building design. After a stint with Joseph Silsbee where he worked as a draughtsman alongside Frank Lloyd Wright, Maher opened his own firm in 1888. Influenced by the styles of H. H. Richardson and Louis Sullivan, Maher’s houses reflect the “form follows function” dictum associated with Sullivan’s work. But while fellow architect Wright would follow the elaborate ornamentation of Sullivan’s cursive elements, Maher would eventually lean towards the Arts and Crafts movement in the houses he designed. 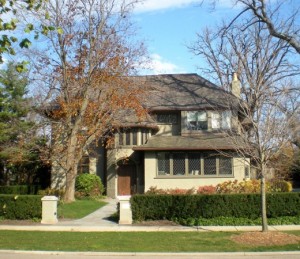 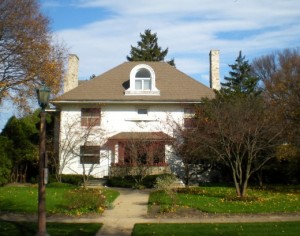 Beginning in 1893 with his own home in the northern suburb of Kenilworth, Maher went on to design forty distinctive houses there as well as several homes in Chicago’s historic Hutchinson Street District in Uptown. At the same time, he became allied with the developer of the Edgewater community on Chicago’s lakefront, producing a series of homes that still stand today on Sheridan Road. 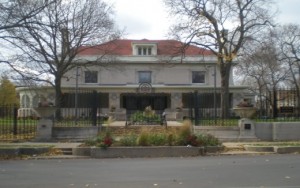 But the most influential commission Maher would receive was from John Farson. The house now known as Pleasant Home in Oak Park, Illinois would establish the tenets of Prairie School design for posterity. Its success was copied time and again by other architects of the period.

At the same time, Maher was developing a unified design concept known as the Motif-Rhythm Theory. By incorporating an element in both the exterior and interior of the building—say a local plant, a geometric shape—he created some kind of decorative element throughout that ties the whole project together. 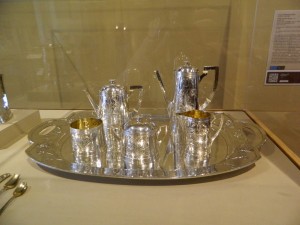 Not only did Maher create plans for innovative and beautiful homes, he designed furniture, lamps, silverware and stained glass.

Many of his houses have distinctive windows that either he drew or commissioned from other firms such as Giannini and Hilgart, Healy and Millet, and Tiffany Studios. 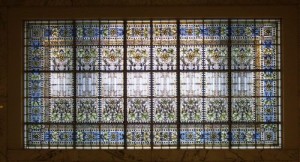 So the next time you visit the gallery, take a look at the detailed thistle frieze below the glass dome and the unifying design of the room with its carved lion heads by disciple and architect Robert Seyfarth. Take a moment to savor the genius of a unique artist, someone very much ahead of his time.

One response to Interior Designers of the Nickerson Mansion: George W. Maher