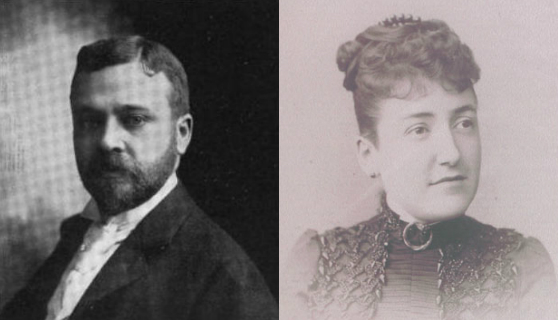 The Young Mr. and Mrs. Nickerson: A Brief History

“For the last five years Mr. Nickerson has been considered one of the choice fish in the social swim,” wrote a New York Telegraph correspondent, “and all sorts of bait have been thrown at him.”

That’s how a report of the wedding nuptials of Mr. Roland C. Nickerson and Miss Addie T. Daniels begins. Roland was 27 and the only son of one of Chicago’s most prominent couples: Samuel and Mathilda Nickerson, the president of First National Bank of Chicago and a great art collector. Roland lived, the reporter commented, in “a palace” and “never had to learn the lesson of privation.” He was born in Chicago in 1859 and went abroad at 13 years old, where he studied in Hanover, Switzerland, and Paris. When he returned at 18 years old he took a position at his father’s bank at a teller, which he did for two years before heading off to Europe again. His education and traveling finally deemed complete, he joined a banking and brokerage firm, Jamieson & Co.

At the same time, Addie lived just a few blocks away from the Nickerson’s Marble Palace, on Ontario Street. She was born in 1859 as well, to William Y. and Ann A. Daniels.

Roland and Addie’s wedding was a small, elegant affair in the Daniels family’s home in 1886. The English-style afternoon ceremony, which included a mandolin processional, was lovely, and “the presents were astounding.” The most valuable of these was, wrote that same New York Telegraph reporter, “a lump of bank stock [that] was not mentioned publicly.” Roland gave Addie a pearl necklace with a diamond clasp; Samuel gave her a pair of diamond solitaire earrings and an Indian shawl; Mathilda gave a lace pin of flowers with diamond hearts. And the nuptial book was a high point: it was the only duplicate of one used by President Grover Cleveland, bound in white leather.

The happy couple honeymooned on the East Coast. Accompanied by friends in a fine, custom-made C. P. Kimball & Co. break (a sort of fancy carriage), they took in the coastal air and stayed in Brewster, Massachusetts, which, in addition to being the center of both of their American ancestries, would also be adopted as their favored summer retreat. Samuel’s beautiful mansion there had cost $300,000 to build, overlooked Cape Cod Bay, and its estate enclosed the largest game preserve in New England.

After the honeymoon, Roland and Addie returned to Chicago to reside together in the Samuel M. Nickerson House. Roland’s childhood room adjoined his father’s, while across the hall, Addie’s new one adjoined Mathilda’s. Three years later their first son, Roland Jr., was born (in 1889); Samuel Jr. was born in 1895; and their last, Helen, came in 1898. By the time Roland and Addie left Chicago with Samuel and Mathilda in 1900, the marble halls of this mansion echoed with the sounds of an 11-year-old, 5-year-old, and 2-year-old.

After leaving Chicago, the young Nickerson couple probably spent most of their time in New York City, in a four-story residence on Madison and 39th. But Addie and Roland also got a magnificent Brewster summer home of their own, completed in 1890 upon the larger Nickerson estate (pictured below). As the story goes, Samuel stood one morning on the bluff overlooking the water, “jabbed his gold-tipped cane into the ground, and declared that a house should be built there” for Roland.  It was called Fieldstone Hall, and a domestic staff of nearly two dozen servants helped stage lavish parties for important guests. One such guest was Grover Cleveland himself, whom the Nickersons entertained at their private beach and hunting lodge, with the servants dressed in tails and top hats, and bugles announcing the arrival of carriages.

But tragically, this merry mansion burned down on May 24, 1906. Roland had had “an attack of heart disease” in the autumn, and only just arrived the day prior when the fire broke out in the cellar. A man named Ray Cowen, who had been down on the beach collecting oysters, said many years later that he watched as the flames leapt and smoke billowed, and “Mr. Roland Nickerson just sat on the lawn and watched it burn down.” He died two weeks later, at the young age of 51. The obituary reported, “Mr. Nickerson survived the shock of the fire fairly well, but later sank and his death followed yesterday. His illness … was aggravated by the shock of the fire.”

Addie had a steel backbone. She sold the couple’s Madison Avenue home the very next year, and settled more resolutely into Cape Cod.  She and Samuel immediately set about designing a new residence atop Fieldstone Hall’s footprint. The new foundations were of reinforced concrete and stucco, as fireproof as you could get (Samuel had learned from the Great Fire of 1871, after all). This new mansion was larger, with 16 rooms, Italian marble fireplaces and woodwork carved by Italian immigrant craftsmen, and terraces overlooking Cape Cod Bay.

Addie eventually donated nearly 2,000 acres of the estate to be transformed into a state park in memory of Roland and Roland Jr., a naval lieutenant who had passed away in the flu epidemic of 1918. You can still visit Addie’s Fieldstone Hall, with its aura of breezy Gilded Age grandeur; it’s been transformed into a Cape Cod resort.

Resources “About Ocean Edge: Freedom to Go Back in Time,” OceanEdge.com “Addie T. Daniels,” Ancestry.com. “Sale of Madison Avenue Residence—Buyers for West Side Apartments and Dwellings—Successful Auction Offering of Bronx Lots.” The New York Times. May 15, 1907. “Cape Cod Sights: Nickerson State Park.” Fodors.com. “A History of the City of Chicago: Its Men and Institutions. Biographical Sketches of Leading Citizens,” published by The Inter Ocean, Press of the Blakely Printing Company, Chicago, 1900. p. 146.