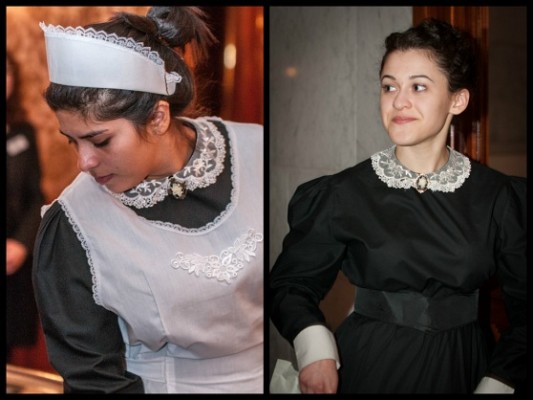 Help Wanted! Q&A with the Actors of the Servants’ Tour

Help Wanted: The Summer Servants’ Tour, the Driehaus Museum’s first living history tour, debuted in 2012 and has become one of our most popular programs.

During the tour, guests travel back in time to 1899. Rather than participating as mere bystanders, they are applicants to live-in domestic service positions in the Nickerson Mansion. (The former servants, with the exception of the brisk English housekeeper Mrs. Williams, were fired due to a mysterious “incident” – you’ll have to experience it to find out!) Now, with the Nickersons away at their summer estate in Cape Cod, Mrs. Williams is in charge of fully staffing the grand house with a butler, footmen, ladies’ maids, parlor maids, a cook, and more.

Michelle Flores (left in the photo above) and Tasia Hoffman (right) have been entertaining tour groups as the bantering pair Mrs. Williams and her backup, the lower maid Lizzy, since the beginning. To celebrate the second year of the Summer Servants’ Tour, we find out more about how they prep for the role, favorite moments of the tour, and who they enjoy playing best.

Both of you have been leading the Servants’ Tour for over a year now. Do you do research on the side to keep up with the role?

Michelle Flores: Oh, absolutely. Continuing to learn about the era you are representing is really important for a living history tour, especially because guests can ask questions during the tour that might trip you up.

Flores: They might ask about how many other Chicago homes had electricity in 1899. Or, because there were en suite bathrooms in the Nickerson Mansion’s bedrooms, people are curious about the plumbing and how that worked. There’s also a lot of fascination with the dinner parties. For example, during the tour I explain that a dinner party would be seated with one man, then one woman, then another man, and so on; and no colleagues or spouses are to be seated together, to encourage the flow of conversation. Once someone asked, “What happens if there’s an odd number of people?” Luckily I had done a little research on that and was able to answer.

What was the answer?

Flores: If there is an odd number of people, you would actually invite another—of whatever gender you’re missing—to make it a complete set.

What are some of your favorite resources?

Tasia Hoffman: I use the Museum’s resources for background information that relates to the house, or interesting anecdotes about other families who were living at the same time and had “servant problems,” as they called it.

Flores: I’ll also look through old issues of Ladies’ Home Journal. Another great resource is the Frances Glessner’s diaries, which are in the collection of the Glessner House Museum. Mrs. Glessner kept very detailed account of their lives, and wrote extensively about the servants. It’s absolutely fascinating. I can only imagine, having more square footage to care for, the procedures Mrs. Nickerson would have put into place for her servants.

Hoffman: Well, she’s a British lady who immigrated to America. I imagine that she had really great training in domestic service in England, and those values really inform how she conducts herself in a professional setting.

Flores: Because I’m a bit tan, my Mrs. Williams has a bit more of a backstory. Her father is from England, and was in India when it was still a British colony. He married an Indian woman there, and Mrs. Williams is the product of that union. When they moved back to England, she wasn’t totally accepted. That, or because she was a soldier’s daughter, is why the only position she could get, class-wise, is as a servant or governess.

Hoffman: She’s the kind of woman who really enjoys being a strict boss, delegating tasks—she takes a lot of pleasure telling the ‘applicants’ when they’re wrong. [Laughs.] She likes to run a tight ship, but not because she’s an unhappy or mean woman. When she does these interviews, she even likes to joke around with the guests—but then will sort of snap back so it’s clear the jokes can’t go too far.

How do you spend the few minutes before the tour?

Hoffman: Sometimes I walk around the mansion a little bit and talk to myself, reciting parts of the tour or sometimes just nonsense, to get into character and make sure I’m on my voice. It’s important to make sure I’m being truthful to the historicity of the character, and not dropping colloquialisms that we use in the modern day. It’s 1899, not 2013, and I want to make that really clear so the living history part of the tour feels really real, and guests can jump in and get ready to have fun for the next hour.

Flores: A minute or two before I actually go down into the servants’ quarters for the tour introduction, I start running around in the kitchen. I run back and forth a few times until I’m a little breathless. For the Summer Servants’ Tour, part of the story is that all of the other household staff have just been let go, and Mrs. Williams is practically on her own and needs to hire new help. So she’s a little hurried and stressed and out of breath, which isn’t typical for her.

Let’s talk about Lizzy, the lower maid who comes along for these interviews. How has she has developed as a character over time?

Hoffman: She started out without very many lines—more as an extra set of eyes to make sure guests’ questions were being answered or that no one got left behind. But as the tour evolved, she became an integral part of the script. A relationship developed between Lizzy and Mrs. Williams. She blurts out what’s on her mind, and is a little improper by Mrs. William’s standards. I love any moment when I’m playing Mrs. Williams and Michelle is Elizabeth, and we get to banter during these little moments during the tour. I love entertaining and engaging the audience in that way; it’s very fun.

So if Mrs. Williams is Tasia’s favorite role, who’s your favorite to play, Michelle?

Flores: You know, I have to say, I prefer playing Lizzy. Mrs. Williams takes a lot of energy to be that proper all the time. Lizzy gets to have the most fun. She has more leeway in talking to guests, and gets to tell everyone how much of a meanie Mrs. Williams is. [Laughs.]

What are some of your favorite moments during the tour?

Hoffman: Honestly, I love anytime there’s a kid on the tour. They just come into it with such an open mind, and their eyes get wide and they respond totally in line with their impulses and instincts. They’ll turn to their mom or dad and say, “We’re never going to make it through! We’re never going to get the job!” Adults might say, ‘Okay, we’re going to play pretend for an hour,’ but kids don’t even have to think that—they’ll just jump in headfirst with you.

Flores: A favorite room of mine is Mrs. Nickerson’s bedroom, because that’s where we discuss phrenology. People used to believe in measuring servants’ skulls to determine their personality and ability—there was an actual article in the Ladies’ Home Journal that gave particular measurements for what a good ladies’ maid’s head should be like. So while it’s an educational part of the tour, it’s also done in a really entertaining and funny way. Mrs. Williams and Lizzy line up the ladies’ maids guests in Mrs. Nickerson’s bedroom and check the height of their foreheads, the distance between their forehead and chin, and so on. A lot of people laugh at the pair of them trying to decide which candidate has the best head shape.

How do you handle the occasional parts of the Museum that don’t have their original fixtures surviving in them, like the kitchen, which is our Admissions area today?

Flores: Those can be some of the most entertaining moments on the tour. You get into the kitchen, and while we have historic photographs of what it looked like originally, everyone is looking around thinking, ‘This isn’t a kitchen…’ What they can see is a computer at the Admissions desk. So we started referring to the computer, saying, “Oh, this must be one of Mr. Nickerson’s trinkets”—since they were such prominent art collectors—“and I’m not sure where he got it.” I’ll pretend to forget, and then Tasia reminds me, “He got it in CHINA.” That always makes everyone laugh.

Help Wanted: The Summer Servants’ Tour is available for the summer season only—before the Nickersons return from their Cape Cod estate!—through September 1. Tours take place on Sundays at 11 a.m., Mondays at 3:30 p.m. and 5:30 p.m., and Fridays and 5:30 p.m. Tickets are $15 for adults and $8 for youth ages 8 to 12 years. Please note that the ‘back of the house’ is explored via several staircases. For additional information, please call 312 482 8933, ext. 21.

Photos by Amy Boyle for the Richard H. Driehaus Museum, 2012.