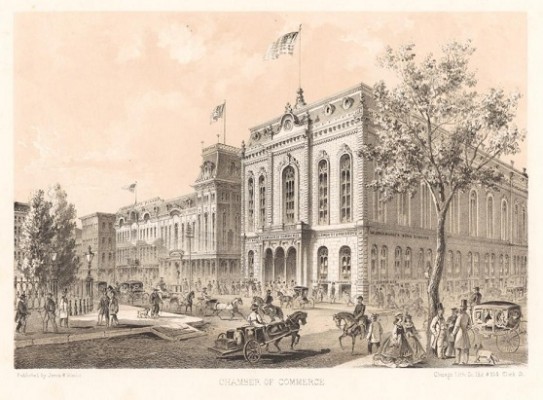 [Speaking of Architecture] The Life and Work of Edward J. Burling

In 1844, he became as the second—ever—architect to set up a practice in the nascent metropolis. In the 1850s and ‘60s, Burling formed prominent peaks on Chicago’s very first skyline, designing buildings like the first Chicago Chamber of Commerce, Tribune Building, Holy Name Cathedral, US Post Office and Customs House, Marine Bank Building, and Music Hall. Beyond these major cultural, municipal, corporate and ecclesiastical buildings, he also built Chicago—the Stacker of Wheat—its first grain elevator, and a number of important private Victorian-style residences.

Of course, our favorite Burling building is our own. His 1868 design of the First National Bank of Chicago where Samuel M. Nickerson was president must have caught Nickerson’s eye, and in 1879 he commissioned Burling and his partner at the time, Francis M. Whitehouse, to build a private residence on practically as grand a scale as the former fine bank.

Edward J. Burling was born April 24, 1819, to Nathaniel and Elizabeth Burling in Newburgh, New York, a bustling village located along the Hudson River between New York City and Albany. He was never formally trained nor completed his education, but began a carpentry apprenticeship as a teenager, heading up the design and construction of a few homes himself after gaining experience.

At 24 years old, Burling undertook the long journey from Newburgh to Chicago by water. The trip took weeks, as he first sailed or steamed north on the Hudson to Albany, down the slim Erie Barge Canal to Tonawanda (Buffalo), and across Lake Erie to Detroit; trained west across Michigan to New Buffalo; and, finally, by boat again across Lake Michigan to arrive in the City of Big Shoulders itself.

Chicago, a rural outpost just a few years before, was absolutely exploding. Burling arrived in 1843, and the city was about to make a 500% leap in population within one decade. (There were less than 5,000 settlers in Chicago in 1840, and by 1850 there were approximately 30,000. By the time of Burling’s death, in 1892, Chicago’s population would be about 1.1 million.)

The building industry at that time, to put it lightly, was boisterous. Chicago must have looked like paradise to a young carpenter hoping to make a name and good life for himself. Burling was there just a few months before he took that long boat journey back East again, married Elizabeth G. Proctor in his hometown Newburgh, and then took her back with him to settle in Chicago for good in 1844.

Burling’s first important commission came in 1845, when he was hired to build a Greek Revival home for Eli B. Williams, one of Chicago’s earliest settlers and real estate developers. On a wooded estate not far from the lakefront, on the corner of Monroe and Wabash, Doric columns surrounded the pure-white residence. It was here the young Burling set a tone he wouldn’t stray far from in his career: a stately, classical style that lent itself well to churches, government buildings, and grand homes.

After that, the real estate mogul William B. Ogden, who had been Chicago’s first mayor in 1837, hired Burling to work for his firm, Ogden, Jones & Co., as general superintendent of all of its buildings. For the next decade, this provided steady work for Burling as he and Eliza had six children together. Soon, however, Burling went back to work for himself, forming a partnership with Frederick H. Baumann in 1852 and creating the firm Edward Burling & Co. in 1855. And the work poured in. One record shows that Burling had, at one point, construction moving forward on one church, one residence, one public building, three hotels, and twelve commercial buildings, plus five jobs outside of Chicago.

Burling was a soaring success during these early years, and embodied the gusto and panache that defined early Chicago life. But unfortunately for Burling’s legacy, nearly all of his early work was consumed by the Great Fire in 1871, a blaze that practically wiped Chicago’s slate clean. Despite Burling being a very early advocate of fireproofing, his Tribune Building—the first supposedly fireproof building in the city—saw its iron beams melt into liquid rivers in the blasting heat, and its stone baked and crumbled to dust. Still, a stone-walled survivor of Burling’s early work stands next to the Driehaus Museum today: St. James Cathedral, which he built in 1857 and rebuilt in 1875.

Although that magnificent early body of work could never be recovered, Burling worked harder than ever after the Fire, gaining more commissions than before. It was later said of Burling that he was “a splendid specimen of the best type of self-made men,” the highest compliment one could offer in that enterprising age. He formed a firm with the great architect Dankmar Adler, and the pair were said to have reconstructed four linear miles’ worth of streetscape in the single year after the fire, more than 100 buildings in all. Some were rebuilds—including the second Tribune Building and Marine Bank Building—while others were new, important commissions, including the Chicago Post Office and Customs House and Methodist Church Block, a religious denomination with which Burling was strongly affiliated. He also took on some simpler, more practical buildings, including the 1872 commercial lofts surviving on Lake and Franklin Streets and a number of 1875 brick Italianate row houses, which have also survived and are designated historic districts on North Burling and North Fremont Streets.

It wouldn’t be a real Chicago tale without the question of corruption thrown in. Although his name was eventually cleared and his obituary would laud him as among the most honest of men, Burling’s reputation was threatened when he was indicted with seven others by a Grand Jury in 1878 for a conspiracy to defraud the government of $650,000 (for perspective, that’s about $15.2 million in 2012 dollars).

The headline of one of many New York Times articles covering the case against the Chicago Custom House architects and construction superintendents, 1878.

The Chicago Post Office and Custom House, completed 1896. Edward Burling was the Superintendent of Construction for this building that was the source much controversy after its completion. Image courtesy of Northwestern University School of Law.

The building in question was the new Customs House, of which Burling was Superintendent of Construction and which would take long years to complete.  Public outrage was ignited when, upon inspection, it was discovered that the building was taking pretty poor shape. The problem, mostly, was the stone—the full price of which, counting it as the highest-quality material, plus hauling and carving, had been charged to the government with vouchers with Burling’s, and others’, signatures on them—was crummy. It was pocked with holes and pockets of iron and petroleum, which had been pasted over with shellac. The men were all eventually acquitted for lack of evidence against them. Although the stone’s poor quality was indisputable (not to mention the labor incredibly slow, etc.), Burling told a Chicago Tribune reporter who called him in his home that “he had papers in his possession to show that he had opposed the continuance of a system of things so unprofitable to his Government.”

Church of the Epiphany (201 S. Ashland Boulevard). Built 1885, Burling & Whitehouse. The Episcopal Church, which is still standing, is one of the earliest examples of the Richardsonian Romanesque in Chicago.

Burling and Whitehouse continued working together until his death in Feburary 1892. Their final project was en medias res, and a monumental one Burling never saw to completion: the World’s Columbian Exposition of 1893. He was one of the ten architects brought together to plan the fair’s architecture. He and Whitehouse were given the design of all of the building entrances, as well as the Casino, described in a contemporary guidebook as “Venice in the waters of Lake Michigan.”

The Casino consisted of nine pavilions poised at the end of a long pier, built on piles. Fairgoers traveled between the pavilions on gondolas and little bridges, inspired by Venetian modes of travel. At night, the harbor was lit by “incandescent lamps sunk beneath the surface of the water,” and gave visitors a place to enjoy the cool lake breeze, music, and a view of the entire White City back on the land.

Burling died before the fair was opened to the public. But if we think of the design of the World’s Columbian Exposition as the peak of Chicago’s post-Fire, Gilded Age-era spunk—and in many ways, it was—Burling had seen the city through its most fascinating, phoenix-like phase, playing an integral role in Chicago’s rise, first from the prairie soil, and then from literal ashes.