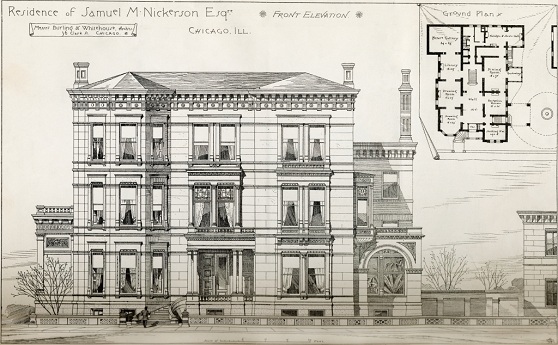 “He Thought it was Architecture Run Crazy”

In many ways, we’re actually 10 years old—the restoration that shined up this magnificent relic of Gilded Age-era Chicago began in 2003, the same year the Museum was officially founded. This year could also be considered our 130th anniversary, since the finishing touches of the Samuel M. Nickerson House were completed and the family—Samuel, his wife Mathilda, and their son Roland—began calling it home in 1883.

In honor of all of this looking back, we bring you a letter by the young architect D. Davis, who was working on the interior drawings for the Nickerson House in 1881 under the Chicago firm of R. W. Bates & Co., one of the major decorators commissioned for the mansion. Davis mentions the other Nickerson House decorators, as well—William August Fiedler, of the firm of Addison & Fiedler; and George A. Schastey & Co. of New York. Filled with ambition (“Bates offered me $10.00 per week but finally gave me $13.00 when I would not take less…”), little observations and bits of news (“You should have seen the Chicago River this spring…”), and plenty of details about parts of the Museum that have survived to this day (“They are now putting up the stair rail, which is of choice marble with beautifully carved alabaster…”), this is one of our favorite pieces of history associated with the house.

The reference to “Adler” is, of course, Dankmar Adler. Thankfully, the quote that lent a title to this blog post—“he thought it was architecture run crazy”—is in reference to Adler’s new “strongly oriental” style, and not the Nickerson House!

Friend Mason:
Last Friday I received from Dufane [sic], then at Detroit, a telegram asking if I had received a letter from him during the week, which I had not, so I do not know its contents. The dispatch came in care of R. W. Bates & Co. so I fancied you must have had something to do with it. I wish you would send me Duvane’s [sic] present address. I answered on the back of the dispatch so I possibly would not get his initials right.

Adler led off with a new style this spring and last winter. It is strongly oriental. J. M. van Osdel, Jr. told me he thought it was architecture run crazy. It certainly is a departure in the Jewish direction such as I have never seen before, and has features belonging to the ancient Egyptian. Burnham & Root have gotten up their first office building that I know of. From the heavy brick Portland Block, corner Washington and Dearborn Streets, it runs South some 80 feet on Dearborn and is six stories tall, with mansard and steep tower shooting skyward. Now that the N. W. Depot is finished it is universally admired.

I do not know whether you visited the interior of the Nickerson’s house when you were here, as I recommended, or not. The steam engine and rubbing bed was running last Saturday grinding away the marble pretty much as it was when you were here, except we (R. W. Bates & Co. and employees) have made them move out of the library and art gallery, and they have gone into the drawing room. Their work is pretty well finished. They are now putting up the stair rail, which is of choice marble with beautifully carved alabaster open work about 1 ½” thick between rail and curb. Floor of main hall, which is about 18’ x 52’ on first floor, also on second floor is of white and black marble blocks. The walls of hall are of various colored marbles and onyx finished off in wainscoting or dado, with field or wall above to frieze and then cornice surmounted thus: [sketch] to ceiling by an oblique or overhanging tier of panels.

All this work is done off in panels, etc., which I will here give you an idea of by rough sketch [sketch of marble wall in hall] as nearly as I remember how it is. The carving I do not attempt to show, but caps, rosettes and other carving is introduced wherever it will improve appearances. Stiles, columns, etc., are marble and panels are onyx.

The ceilings of the halls are marble panels in iron framework. In front of the grand stairway in second story there is an opening through hall floor to first story, enclosed by marble and alabaster railing, the plan of the second story being thus: [sketch]

The third story hall has parquet floor. The woodwork, which is nearly completed in all front part of house (that is, on both sides of main hall and in art gallery) is nearly as much as better than the finish in Thompson’s house, as the finish in Thompson’s house is better than common pine band-mould finish. It would be hard to comprehend its beauty without seeing it. As you may remember, it was designed by A. Fiedler who for years was designer for one of the leading decorative and art furniture manufacturers of New York City, under a salary of some $1,800 per year, working about six hours a day. I have seen him work. He will do as much drawing in an hour as a pretty good ordinary draughtsman will do in five or six hours. His scale drawing is chiefly lead pencil sketches, largely done free-hand, over which he brushes on a tint of water-color.

Some years ago he came here from New York City with some seven or eight thousand dollars and started a factory, but was drawn into some real-estate speculation and lost all. Then he took a partner and they failed again, our foreman says, by giving rich people better work than they will pay for. Last year he hired to Schasty [sic] of New York [George A. Schastey], who finished the drawing room and some other rooms of Nickerson’s, but this spring he came back and went in with Adison [sic].

I have it pleasanter this year than I had it last. Bates offered me $10.00 per week but finally gave me $13.00 when I would not take less, and tried to have me contract for two years instead of one, which I would not do. The evening after the day I pledged myself to Bates, Addison & Fiedler offered me $14.00 per week by the year. Bates was sharp and forced me to a contract before my time ran out, so others should not have a chance to make me offers.

We have Mitchel’s work about ready to set up. Mrs. Alex. Mitchel, after buying carpets for the room, came around and ordered a design for one woven whole. We have recently gotten up carpet, mantel and furniture for a very large and beautiful parlor in Louisville, Ky., in Louis XVI style, with a little Japanese feature introduced which enlivens the style much. Last Friday and Saturday I was detailing the cupboard closets and paneling that enclose the plumbing in the bathroom off of Nickerson’s own chamber. It is in St. Domingo mahogany, trimmed and relieved with brass. The floor of this bathroom is encaustic tile—wainscoting marble. Between it and the frieze, same as floor, plain light grey encaustic tiling, band under frieze marble, Frieze diaper-pattern of yellowish green glazed encaustic tile, each piece about 3” square, every other one having rings, thus: [sketch]

To make details of wood for this room the foreman got me to stop off of the job Bates left me on. Bates is now in New York. He left me with orders to complete the design of finish for drawing room of a New York City Mansion, one side of which he took with him. We had already designed a hall carpet for them which they liked sufficiently to order; and to take the finishing of their drawing room out of their architect’s hands and give it to us. The woods we propose to use are satin and Amerant, style Louis XVI, with Japanese treatment of ornamentation. Ceiling is timber ribs and canvas panels. Plan of room is thus: [sketch]

We also furnish this room and the dining room.

In our first class houses it seems to be the present fashion to give the designing of the best rooms to decorative cabinet designers, American architects as a rule not being sufficiently educated in this department of their profession. Viz: Burling is architect of Nickerson’s house, but Fiedler was employed on the room finish, and even in marble work, Fiedler’s design for stair rail is taken in place of Burling’s. Even at lower end of main stair the iron framework of flaring end of stringer and curb is being cut away to suit Fiedler’s changes. The ceiling under stringers and panels outside of curb to these stairs, also risers and treads are marble.

One block south of Nickerson’s, Medill is building a large house. Palmer and Spinning are the Architects but Fiedler has been employed to design finish for two best rooms, and R. W. Bates & Co. have contract for the work. We also have contract of finish for main hall, dining room and closets off. Very little of the work comes to us completely enough detailed that our men can make the work until I go over the drawings and complete them, so you may warrant that I don’t have much loafing to do. Bates deals in carpets, and I have to measure the rooms and prepare the diagrams for these also so that the carpets made from them will fit. Our largest carpet order this season was for a house on Prairie Ave. and amounted to about 800 yards. It was almost like a hotel in size. There were six bays to fit with window recesses, mantels, hearths, stairways, etc.

I want to find out what Dufane [sic] wants of me. I would as soon as not leave Chicago for a good offer next spring. Bates, I think, wants too much for too little, and I should like to get out of this very fine work before my eyes fail on me. You should have seen the Chicago River this spring, running with a furious boiling torrent into the lake. It runs the other way now, and I believe a move is being made to run the tunnel two miles farther into the lake. I am glad of it, for the water does not taste very good at second drinking. My best respects to you and Jack Rice, and all your folks.