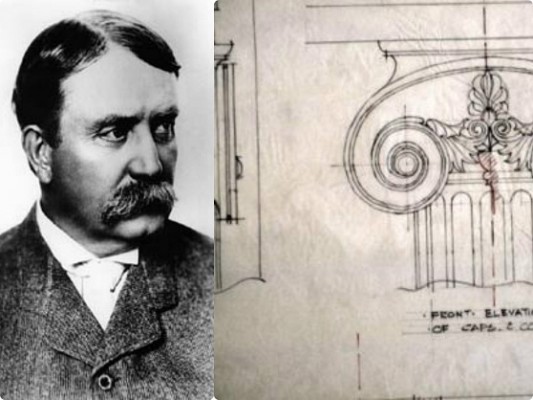 The Burnham Plan and the End of McCormickville

The gleaming White City of the World’s Columbian Exposition made Daniel H. Burnham, architect, into a city planner.

Some may say this White City of Burnham’s was a dream short-lived—intended to be temporary, it was destroyed by fire and mostly dismantled not long after the closing of the fair. But you can’t deny that it was still a pretty amazing dream. The fairgrounds’ integrated transportation, sanitation systems, beautiful landscaping, and sweeping classical architecture inspired the reformist City Beautiful movement, in which urban social ills were addressed with American Progressive ideals and European Beaux Arts style.

Burnham, who was of course a major leader of the City Beautiful movement, created or contributed to plans for the cities of Cleveland, San Francisco, Washington, D.C., and Manila and Baguio in the Philippines. A plan for his own city, Chicago, was completed in 1909.

Speaking generally, we call it the Burnham Plan, but the Plan of Chicago was created by Burnham with the architect and future city planner Edward H. Bennett, under the direction of the Commercial Club of Chicago. It called for, among many other things in a document of over 150 pages, changes to our rail systems, city parks and squares, an improved lakefront with a yacht harbor, transportation and highway systems to solve congestion, and “impressive groupings of public buildings” to communicate the city’s dignity.

For our purposes in this blog post, there was also the simple matter of a bridge. This bridge would link Michigan Avenue, a busy little street south of the Chicago River, to the quiet little residential Pine Street north of it. Pine Street would also be widened significantly; Burnham envisioned Chicagoans strolling along a broad, Parisian boulevard extending as far as the eye can see.

From Plan of Chicago: Paris, Avenue des Champs Élysées, from the Place de la Concorde, showing the Arc de Triomphe in vista; view west; from a published source. Image via Without Bounds or Limits: An Online Exhibition of the Plan of Chicago, The Art Institute of Chicago.

For McCormickville, that bridge—and the transformation of Pine Street into an extension of Michigan Avenue—meant huge changes.

If you have taken our walking tour, you know that McCormickville is the historic nickname of the neighborhood immediately surrounding the Driehaus Museum. Sally Sexton Kalmbach, the wonderful Chicago historian who leads the tour, loves to say that “McCormickville has had nine lives.” And one of those early lives was as a quiet, residential enclave for Chicago’s wealthy elite—business industrialists, judges, ambassadors, bankers, and the like (including, of course, many members of the McCormick family). The architecture was marvelous, with Richardsonian Romanesque residences, Empire-style mansions, and stone cathedrals.

In 1920, when the Michigan Avenue Bridge and expansion of Pine Street were completed, a new life would begin in the neighborhood.

Prior to 1920, the easiest way across the Chicago River from this neighborhood was at the narrow, tendered Rush Street Bridge. Travel across in both directions would become terribly congested and inconvenient, and that kept things pretty quiet around here.

The bridge was a feat of engineering and, in line with the Plan‘s mission to solve congestion in the city, had far greater capacity. Designed by young Bennett, it is a bi-level bascule bridge. The two levels allowed for far more foot and vehicular traffic to pass through, eliminating jams at the Rush Street bridge and elsewhere along the riverfront, but also swung upward to allow water traffic, allowing commercial boats to continue unhindered. The bridge still exists today, both as a Chicago landmark and busy thoroughfare carrying thousands across the river, in cars and on foot, daily.

Illustration of Michigan Boulevard and bridge as proposed in Burnham & Bennett’s 1909 Plan of Chicago, looking north.

The construction incurred some immediate architectural losses for the greater good. The widening of narrow Pine Street into a Parisian-style boulevard required that the houses lining it had to be removed, piece by piece. The most famous of these was the Perry H. Smith house, a stunning white marble mansion with a mansard roof on the corner of Pine and Huron.

Inside the Perry H. Smith residence was a little theater in addition to the usual reception rooms, and, in the butler’s pantry, three faucets over a sink: one for hot water, another for cold water, and the third, in the center, for sparkling Champagne. In the photo below, people in a 1918 version of a double-decker tour bus watch as it is carefully dismantled.

By 1925, the Chicago Plan Commission reported that the new bridge was carrying seven times the traffic as the (dismantled) Rush Street bridge had. Two halves of the city became one, as it were, and property values north of the Chicago River rose (which Burnham predicted in a letter to Bennett, here). The wide boulevard paved the way for development and, eventually, a bustling commercial and office district—which, as Sally would say, several lives later, became the Magnificent Mile. It lost its residential nature, as many of McCormickville’s elite inhabitants began to drift northward away from the bustle—to the Gold Coast or beyond—for a more suburban feel. Except for Anita McCormick, who stayed in her Rush Street residence until her death in the 1950s—the McCormick descendents were also among those who sold their mansions, taking their name with them.

For further reading, “The Plan of Chicago,” on the Encyclopedia of Chicago website, is an enormous resource for the inspiration, planning, and implementation of the 1909 Burnham Plan. HistoricBridges.org has a detailed page detailing the Michigan Avenue, now called the DuSable, Bridge.