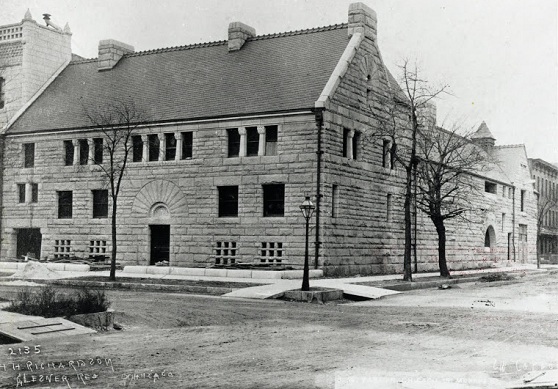 [Speaking of Architecture] The Story of H. H. Richardson

A beautiful Romanesque house was completed for John and Frances Glessner in 1887, just five years after the dust had settled from construction on our Nickerson mansion. The residence was located—and still is today—just over the Chicago River and a few miles south of us in Gilded Age Chicago’s fashionable Prairie Avenue district. With illustrious neighbors like Marshall Field and George Pullman nearby, the Glessner House worked in a distinguished, old-money, European-influenced tone, yet also represented a totally inventive, modern, American style—that fabulous Gilded Age contradiction.

The man for the job was Henry Hobson Richardson (1838–1886), the great Louisiana-born architect who spent his formational years soaking up French styles abroad, but went on to pioneer a style unique enough to be named after him: Richardsonian Romanesque. From his offices on the East Coast, Richardson designed a number of buildings for Chicago in addition to the Glessner House, including the Marshall Field Warehouse (demolished 1930) and the MacVeagh House (demolished 1922). Reportedly the Glessner House, with its medieval fortress-like exterior concealing a sunny, private courtyard within, was the one private commission Richardson said he would have liked to live in himself.

The following text comes from an original post on the official Glessner House Museum blog, The Story of a House. This month, on April 27, will be the 127th anniversary of Richardson’s death at the age of 48.

Portrait of H. H. Richardson by Hubert Herkomer. Image from “A tribute to Henry Hobson Richardson,” Story of a House.

Generally regarded as the first important American architect, Richardson was also the first to earn the recognition and respect of architects in Europe.

John Glessner wrote extensively about his interactions with Richardson, including their visits to his home and office in Brookline, Massachusetts. To honor the anniversary of Richardson’s passing, we present a few excerpts from an unpublished manuscript about Richardson that John Glessner wrote in 1914.

“His career was brief.  In his time, he was the greatest architect America had produced and keeping in mind the other great men since then, I doubt if there has been any his equal. However comparisons are invidious, and it is the last thing that Richardson would have done or have wished any one else to do to draw such or cry down any contemporary.  He was not even critical of a fellow artist, and never would point a defect in another’s work, though ready always to help with suggestions when asked.

The Crane Library in Quincy, Massachusetts, 1881. Image by Thomas A. Heinz from “Jewel of the Romanesque Revival,” The Wall Street Journal.

“He had supreme confidence in his own powers and that sort of man never is envious or critical of others. Laughingly he said both of (Charles) McKim and of (Daniel) Burnham that they had the hardest problems that ever confronted men in their profession – they had designed buildings for their prospective fathers-in-law and then married the daughters with the possibilities of continuing criticism ever after.

An example of a different architectural firm applying the Richardsonian Romanesque style in Chicago. The Ira A. Heath House, 3132 S. Prairie Avenue, ca 1889, attr. to Adler and Sullivan.

“Mr. Richardson was watchful of criticism of his work, especially newspaper criticism, but unconcerned if that criticism didn’t find some really weak point.  If it did, that was a totally different matter.  ‘Oh, I know the weak points in my work’ he said.  Well, Mr. R. what is the weak point in my house?  ‘I don’t know that now; if I did I would correct it.’

The Glessner House in Chicago, 1887. Library of Congress.

“We went together to Phillips Brooks house on Clarendon and Newberry Sts. (in Boston) and justified going in during Mr. Brooks’s absence.  You know an architect may go into any house he has built at any time until it is finished, and there is one closet in the attic of this house that has been left unfinished purposely.

Autographed ink sketch of Trinity church site. In the collection of the Houghton Library of Harvard.

“We went to Trinity church together one weekday morning and sat there practically alone.  There is always a reverent feeling comes over one at such a time, but it was especially marked in this case, in that large lonely room, except for the sun shining through the windows.  Richardson talked of these windows – this one by LaFarge that one by Burne-Jones – all powdered with angels.  He talked of the building as a whole and how pleased the Trustees were, etc.  ‘But they ought to have waited,’ he said.  ‘If they only had waited.  See what I can do now.’”

The portrait of Richardson at the top of this article is by Hubert Herkomer, completed shortly before Richardson’s death.  The Glessners obtained a photographic (heliotype) copy of the portrait from his widow and it has hung in the house continuously since the late 1880s.

The Glessner House Museum is open for guided tours at 1 and 3 p.m. Wednesday through Sunday. For more information, head over to GlessnerHouse.org.