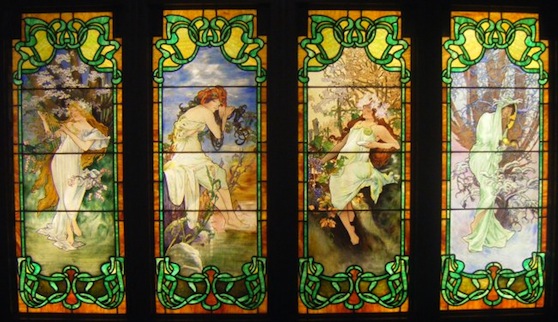 It’s become a Nickerson Lecture Series tradition to welcome a local scholar for the first lecture of the season. Rolf Achilles, an independent art historian, adjunct faculty of the School of the Art Institute of Chicago, and curator of the Smith Museum of Stained Glass Windows on Navy Pier, fit the bill for 2013, starting the Series off with a lecture entitled Great Midwestern Panes this past Thursday. Afterwards, Mr. Achilles joined us for another tradition—the post-lecture Q&A.

Can you talk a little about what’s unique about American stained glass, as compared to the windows made for European cathedrals and abbeys of medieval times?

Rolf Achilles: What’s unique is that it’s not painted. It’s just the individual pieces of stained glass held together by lead, and the glass is used very abstractly. That puzzle pattern and using pure glass, no paint, is an American development of the 1870s and 1880s. We can see that right here in Chicago, in John Holabird’s little Lakeview Presbyterian Church at Broadway and Addison. That kind of abstraction doesn’t look like a typical church window. There are no figures; it’s just a little starburst, a circle of color. That kind of window could be anywhere—and that’s uniquely American.

Something you talked about during your lecture was this idea of signing glass. You had Tiffany Studios doing that, but nobody else.

Achilles: Well, Louis C. Tiffany started out as a painter. He went to North Africa, traveled around, and started to make his name as a painter. And then he went on to be an interior decorator, and he was, of the highest order. And then he went into stained glass. So he took all of that name recognition he developed as an artist and decorator and applied it to his studio. And as artists traditionally sign their work in the lower right-hand corner, Tiffany perpetuated that. So there is generally a signature on all of Tiffany Studios’ windows in the lower right-hand corner. And it’s branding, too—it’s as much about branding as it is about artistic identity. Lamb Studios in New York did windows that were very similar to Tiffany’s, practically copies. So how do you stand out in a crowd? You put your name on your work.

Detail of a stained-glass window in the Reid Memorial Presbyterian Church, located at 11th and North “A” Streets in Richmond, Indiana, showing the Tiffany Studios signature. Image property of Wayne County, Indiana.

It’s often difficult without documentation to assign glass to a particular studio when it’s not a Tiffany. Why didn’t other studios sign their windows?

Achilles: Rather than coming out of an artistic tradition as Tiffany had, many of them came out of a crafts tradition. A carpenter doesn’t sign his work, and neither did most of these manufacturers. Perhaps inspired by Tiffany, some of them—Hooker, and others—began signing their work also, starting in the early 20th century.

So let’s talk a little bit about the stained-glass industry on the East Coast as opposed to that of the Midwest. Does one live in the shadow of the other, or were they doing totally different things?

Achilles: They were doing totally different things. On the East Coast, there were many more studios because it was a denser population with large cities much closer together. And they were the driving force that Chicago’s big firms—Healy & Millet, Wells Company, the Prismatic Glass Company—sort of tried to take on. But they had a limited market, because the city of Chicago was predominantly Catholic, as opposed to Presbyterian—Presbyterian churches commissioned a lot of work from Tiffany Studios and other uniquely American glass. The Catholics tended to commission a more traditional type of window, often imported from abroad from German companies like Franz Mayer & Co. and Zettler Studios.

Why did Catholic churches import from abroad when there were craftsmen available locally?

Achilles: Well, Mayer and Zettler were able to fabricate glass a lot cheaper than Americans, because the cost of making objects was always cheaper in Europe. In 1900, for example, somebody could just cut a rectangular piece of glass and earn an average of $11 a week in the US. In Germany at the Mayer Company, the university art professor who painted the faces in the windows made $7 a week at the same time. In Chicago the Irish, the Germans, the Italians may have built a church for $50,000, and then they had $15,000 leftover for windows. Well, did they want one or two Tiffany windows? No. They wanted the entire life of St. Patrick that came in a dozen windows. Who could deliver a dozen windows for $15,000? These Munich companies.

A window at St. Michael in Old Town, Chicago, one of 16 by the Mayer Window Art Institute of Munich, Germany, installed in the cathedral in the early 20th century.

One of the attendees asked a great question during the Q&A after your lecture Thursday, so I wanted to ask it again for our blog readers: Is stained-glass a lost art?

Achilles: It’s not a lost art. In the United States there aren’t that many people practicing it, because there’s not much of a demand for it. We like glass that’s cute, and we like glass that’s not challenging. We don’t want to have to think about it—it is, after all, a window. They fade mostly into nostalgia today, except in places like the Seattle Art Museum. Seattle’s airport also has wonderful contemporary stained-glass windows; and the little airport in Spokane, Washington, has etched glass.

This isn’t windows, but isn’t the glass artist Dale Chihuly also working from the Pacific Northwest?

Achilles: Yeah, he’s outside of Takoma. And he’s gotten people excited about glass across the United States. He’s a one-man Renaissance. I had a long talk with Chihuly a few years ago when he did the installation for the Chicago Park District, and we talked about him making a window. He didn’t want to. He doesn’t want to do flat glass.

So do we have any modern American stained-glass window designers?

Achilles: Yeah, we do. We have quite a number of them, and some of them even have MFAs. But most of them aren’t trained like traditionally trained figurative artists. They come through an apprentice system of sorts, or they just decide to do it themselves.

Last question. Where can people in the Chicago area go and see some great examples of stained glass?

Achilles: Second Presbyterian Church, where you can see Tiffany’s work and others—Howard Van Doren Shaw, Healy & Millet, and Sir Edward Burne-Jones. The only Burne-Jones windows in the Midwest are two in Second Presbyterian Church. You can also see wonderful English Arts and Crafts figurative windows in Saint James Cathedral right behind the Driehaus Museum. And, let’s see—Saint Michael’s in Old Town. You can go there and see amazing Mayer stained-glass windows from Munich from around 1902. And another church where you can see beautiful windows, these by F. X. Zettler of Munich, is St. Mary of the Lake, which is at Sheridan Road just north of Irving Park. It’s worth looking at the interior and the exterior; you won’t see anything like it in the United States. And then it’s well worth going to the Art Institute, with its Chagall installation and some Arts and Crafts windows in the American wing. Also, to see great figurative mosaics designed by J. A. Holzer with Tiffany Studios glass, go to the Marquette Building. They show Pere Marquette’s adventures.

And then of course, the Smith Museum…

Achilles: Of course. You can see 180 windows, all different kinds, from the high end of Tiffany to the low end of bungalows. And then of course there’s the Driehaus Gallery, which has stupendous Tiffany windows in it, the likes of which you won’t see anywhere else in the US.

Rolf Achilles is an independent art historian, curator of the Smith Museum of Stained Glass Windows, and adjunct faculty of the School of the Art Institute of Chicago. A writer and lecturer on various topics related to preserving American artistic heritage, Mr. Achilles is the author of the forthcoming books, Chicago School of Architecture and Great American Movie Palaces (Shire Library, 2013).