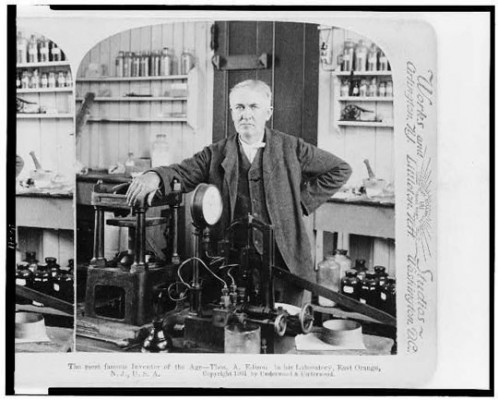 Patenting his electric lightbulb would, more than Edison’s 1,093 other inventions, cement his spot as American inventor extraordinaire. Other than maybe Benjamin Franklin, no other man is as associated in the popular imagination with electricity. As the language of the patent makes clear, Edison’s invention was only an “improvement” on the filament bulbs that already existed (the bamboo, he discovered, could burn for 1,200 hours). But when an improvement so looses the flow of electricity to the masses, the guy who does it gets all the glory.

You’ll recognize the neat line drawings above as the early incandescent light bulb—Thomas A. Edison’s patented version of a 16-watt bulb with bamboo filament, to be exact.

The cozy glow of a similar bulb also fills the Driehaus Museum. In our mission to provide a historical and welcoming space for our guests to enjoy the collection within, we continue to use Edison-style incandescent bulbs. They use a carbon filament that has been double-looped like rabbit ears, while the glass surrounding it has a nice hand-blown shape with a tiny finial atop. We use 30-watt early-20th-century model the manufacturer calls, fittingly, the “Victorian Bulb.”

The original homeowners of this historic mansion, the Nickersons (1883–1900) did have some ultra-modern light fixtures fitted for electric bulbs, but just a few concentrated in the first floor rooms, such as the parlor, where guests were entertained (and, I’m sure, impressed!). The greatest burden still remained on the gas fixtures. But by 1900, when the Fisher family (–1916) moved into this mansion at Erie and Wabash and began fixing up the place for their updated tastes, they installed a series of fixtures along the cornice of the first and second-floor halls that displayed the bulbs without shade or adornment.

The newly-installed light bulbs along the cornice of the Main Hall in the Samuel M. Nickerson Mansion, Fisher Period, ca. 1910.

In honor of the 133rd anniversary this week of Edison’s improvement/invention, here is the original patent petition, courtesy of the National Archives (text follows below).

To the Honorable Commissioner of Patents:

Your Petitioner Thomas A. Edison of Menlo Park in the State of New Jersey prays that letters patent may be greeted to him for the invention of an Improvement in Electric Lamps and in the method of manufacturing the same (lease no. 186) set forth in the annexed specification.

And further prays that you will recognize Lemuel W. Serrell of the City of New York, N.Y., as his Attorney, with full power of substitution and revocation, to prosecute this application, to make alterations and amendments therein, to receive the Patent, and to transact all business in the Patent Office connected therewith.