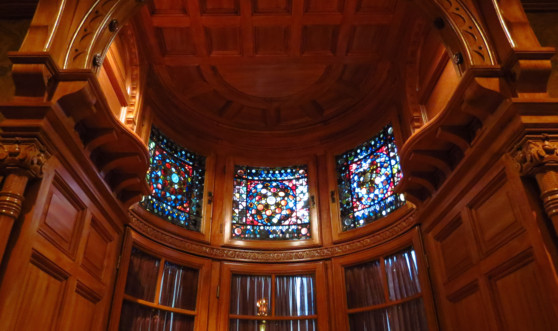 This was a corner room on the floor just below the children’s, and the beauty of it was this window—an oriel window,—projecting beyond the wall, as such windows do, and so exactly at the corner that you could see, so to say, three ways at once when you were standing in it . . . a charming watch tower.”

On a trip to San Francisco recently, I strolled down streets lined with delightful Easter eggs of homes and apartments, most of them boasting the Queen Anne style that became so popular during America’s Gilded Age.

Many of these buildings featured oriel windows—a protruding bay window on an upper floor—which, before being adopted by England’s Queen Anne aesthetic, have roots in late medieval Gothic castles and the architecture of the Tudor period.

In the historic mansion where the Driehaus Museum is housed, the architects designed a different sort of oriel window than what you might find in San Francisco or Great Britain. For an east-facing sitting room on the second floor, the Gothic Revival blends with the fabulously intricate details of Arabic residences and mosques.

The Samuel M. Nickerson Mansion, exterior from the southeast, circa 1883. The oriel window is visible on the second floor, above and left of the port-cochere. Photo courtesy of Roland C. Nickerson. The Richard H. Driehaus Museum.

While our oriel window creates interest on the exterior façade, the interior offers privacy and a sense of escape—today, visitors to the Museum’s upper galleries always seem to enjoy taking a turn standing inside this little carved-sycamore stage. Built as part of a small Moorish sitting room accented with arabesques and minarets, the semi-circular niche features three large casement windows and, on top, a trio of jewel-toned stained-glass panels.

Although the space’s circularity is inspired by the turret forms of Gothic castles, it’s fair to say the Western influences stop there and the Near East begins. Two Arabic architectural styles appear here. First, mashrabiya. The mashrabiya is an Arabic oriel window which typically features intricate latticework in wood or metal. Although this particular oriel window lacks latticework, the nearby built-in desk pays homage to that lovely wood-carving tradition with its small cabinet doors. Mushrabiyas are also known to give stained glass pride of place, as ours does. And note that in the brilliant convex glass panes, the abstract design does not depict a natural motif, such as flowers, trees, figures, or a landscape—as many Victorian windows would—but a strongly geometric pattern that hints at the abstracted forms of Arabic wood carving.

Mashrabiya-style carvings in the desk near the Driehaus Museum oriel window.

An example of mishrabiya, as seen from the exterior of Akil Sami House in Dahshur, Egypt. Photo credit: Aga Khan Trust for Culture.

Another architectural influence is a religious one. In a Muslim mosque, a mihrab is a niche built into the quiblah, or east-facing, wall of a mosque, marking the direction of worship. Although not a window at all, the shape and design of a mihrab is a major influence in the Nickerson Mansion’s oriel window. More a decorative element than a true expansion of the room’s size (a practical function bay windows tend to serve), our window also faithfully faces east toward Mecca.

Like the rest of the original stained glass in the Driehaus Museum, the source of these three stained-glass windows remains an enigma. I discussed them recently with Rolf Achilles, an independent art historian and curator of the Smith Museum of Stained Glass Windows on Navy Pier. He hypothesizes that these could have been manufactured by Wells Glass Co., a prominent Chicago window design and fabricating firm (1870 – ca. 1900). “The firm made similarly bulging windows for the Hackley House in Muskegan, Michigan,” Achilles said, pointing to the shape, lead line thickness and bend, glass types, and Moorish context. But the mystery remains, since “craftsmen of these abstract windows were not artists in the current definition,” he says—so they didn’t traditionally sign their work.

Despite all of the influences described above, “these windows are distinctly American in style,” Achilles says. What he refers to as the “crazy quilt-like” design of this window, which mixes and matches shapes and colors in non-traditional ways, makes it truly unique to this culture, with its habit of capturing and blending other cultures together in creative ways.

Next time you visit, take a moment and relax in this space. This very spot is the residence’s ultimate respite, with windows that in 1883 offered full view of a large garden and courtyard and, some distance beyond, Lake Michigan—and even beyond that, the exotic world of the East.

The quote at the top of this blog post is from The Oriel Window by Mrs. Molesworth (New York: Macmillan & Co., 1896)