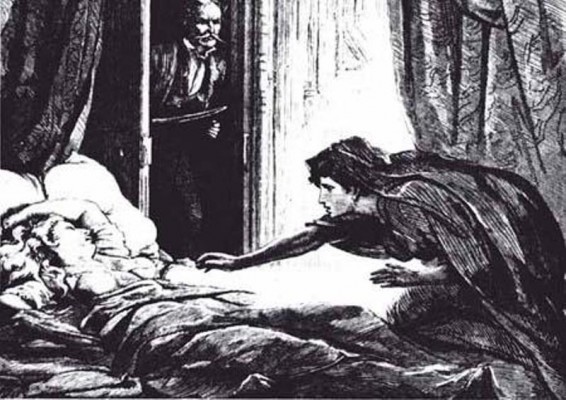 One might be surprised to discover a giant black spider attacking a Gilded Age fine and decorative arts museum. But yes, at the corner of Erie and Wabash, a colossal arachnid is navigating the exterior of the historic Nickerson Mansion. And while the popularity of Halloween decoration, celebration, and entertainment appears to have exploded in the last 20 years, fascination with horror, spirits, mystery, and superstition is not new. In fact, from the Salem Witch Trials to the recently released Paranormal Activity IV, preoccupation with the supernatural has coexisted with the entire American experience. The Victorian era, which encompasses the Gilded Age, was also known as the golden age of the ghost story, and much like the design strategies employed in the Nickerson Mansion, the British had a profound influence on this literary genre.

The early 19th century found Gothic novels wildly popular. However, their success had begun to wane by the 1830s. These novels were essentially tales of romance peppered with superstitious elements, combining melodrama and terror for the greatest effect upon readers. Among educated readers, romance was considered distasteful, while superstition countered scientific and scholarly progress made during of the age of Enlightenment. But with the introduction of the plausible and everyday as narrative components in the late 19th century, a new trend—the ghost story—attracted and entertained even the most rational of skeptics.

The innovative use of a realistic, or plausible, setting for the narrative in many Victorian and Edwardian ghost stories echoed the Industrial Age conflict between progress and superstition. Here, both the protagonist and reader are forced to question the boundary between reality and imagination. Mysterious and frightening events could either be explained by the acceptance of the supernatural—or by perfectly logical factors. In either event, the interior psychological battle that eventually took place wreaked more havoc than any apparition might.

A perfect example is in one of the penultimate tales of this period, The Turn of the Screw by Henry James. In the 1898 novella, a repressed governess begins to believe ghosts of the previous governess, Miss Jessel, and her lover, Peter Quint, are stalking the home and her two juvenile charges. Throughout the story it is implied that Jessel and Quint had rather unsavory relationships with the children, though nothing is ever stated as fact. In addition, only the governess sees Jessel and Quint, and when she does, they are hardly ghoulish apparitions. The real terror plays out in the unraveling mind of the governess, which is exactly why the story remains chilling today.

An illustration for a recent edition of James’s Turn of the Screw, via

A horror story occurring within a plausible setting also questioned the reader’s perception of a familiar environment. The world was getting smaller during the Gilded Age, and in these stories, one did not necessarily have to travel to strange or exotic locales to experience the fantastic—it might exist in the wall behind the wainscoting, a situation far more unnerving than any mythical creature in an imaginary land.

An illustration for an early edition of Bram Stoker’s Dracula, via

Of course any reader is familiar with other titans of the period: Bram Stoker’s Dracula and Robert Louis Stevenson’s Dr. Jeckyl and Mr. Hyde. Bradley Deane, an associate professor of English at the University of Minnesota, Morris, compiled for us a list of both popular and lesser-known ghost stories that he thought would be particularly enjoyed by Driehaus Museum lovers. All of these works are in some way related to a work of art; he calls them “ekphrastic gothic” (ekphrasis being a rarefied term for writing about art). To read the story, just click on the title.

M. R. James, “The Mezzotint”
M. R. James was a prolific writer and author of some of the most highly regarded ghost stories in literature. As provost of Kings College Cambridge, James catalogued many of the libraries at the University. “James is always wonderful in stories about the haunting presences surrounding old books and objects,” Deane says. “This one is about an old photograph that doesn’t quite stay still.”

Sheriden LeFanu, “Strange Event in the Life of Schalken the Painter”
LeFanu was the most successful Gothic writer of the middle of the 19th century, a sort of mid-Victorian Stephen King,” Deane explains. “This story about art, guilt, and a demonic bridegroom is inspired by a painting by the real Dutch artist, Godfried Schalcken.”

Vernon Lee, “Amour Dure”
Vernon Lee was actually the pen name of Violet Paget, recently rediscovered as an important theorist in aesthetics and author of psychologically intense ghost stories. It’s “about a historian studying in Italy who becomes obsessed with portraits of a Renaissance femme fatale, Medea da Carpi,” Deane says. “Is she still as powerful a manipulator of men as when she was alive?”

The preceding titles don’t even scratch the surface of available and enjoyable stories from this era. So many prominent English and American writers of the period—among them Charles Dickens, Oscar Wilde, and Nathaniel Hawthorne—penned ghost stories.

Why do ghost stories remain so popular? Perhaps it’s the thrill of that shiver down the spine followed by an assurance of safety once the book is closed. Perhaps it’s a glimpse into a universe that one cannot possibly understand. Whatever the reason, the fascination with fright isn’t new. One of the questions visitors to the Driehaus Museum most frequently ask continues to be, “Is the museum haunted?” The answer? Well, no—but there does seem to be a problem with giant insects…

Bradley Deane is an award-winning essayist and author of Making of the Victorian Novelist: Anxieties of Authorship in the Mass Market (Routledge, 2002).