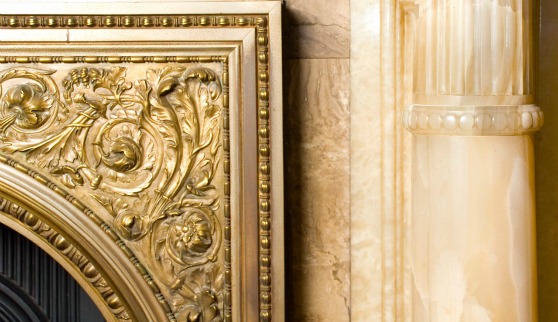 We discussed her topic further just after last week’s lectures.

My favorite part of last night was all of these incredible photographs you showed. I don’t think I’ve ever heard so many “ooh’s” and “aah’s” at a lecture.

It was just such a visual presentation.

D’Ambrosio: Well, one of the things that got me interested in the material is that some of these pieces are so proto-modern and striking. Like the quirky pieces with a patinated finish by the firm of Bradley & Hubbard. They’re such a sharp contrast to some of the pieces that seem more traditional, more typical Aesthetic Movement material— there’s such a dichotomy between objects that are all being made by the same firms at the same time.

Go back to the genesis of this idea for your 2005 exhibition at the Munson-Williams-Proctor Arts Institute, A Brass Menagerie: Metalwork of the Aesthetic Movement. Tell me about your interest in that and how it started.

D’Ambrosio: One of the first Aesthetic metal pieces that I bought for the museum was a Charles Parker hanging shelf. When it came up at auction, I was actually out of the office on leave. But I knew that it had sold at auction, and I called the dealer in New York, and I said, ‘Do you know who bought this hanging shelf?’ And she said, ‘I did.’ And sight unseen, I said, ‘Okay, we’ll take it.’ It hadn’t been touched, so all its original finishes were there. I think I just got hooked by the great combination of motifs and the craftsmanship that goes into the brass and mixed-metal finishes from this period. The pieces are all machine-formed, but there’s so much thought put into the different designs, the different finishes, and the different colors that are put together. It was an avenue that had only been touched on in In Pursuit of Beauty, a ground-breaking Aesthetic movement show that was done at The Met in the 1980s. So it was a great avenue of research.

What were some of the main themes you wanted people to be able to take away from it?

D’Ambrosio: Well, certainly the art history about what was influencing American decorative arts and art metals at the time, because it ties in both the Aesthetic movement and the influence of the decorative arts from England, and the direct impact of Japan on the United States in the 1870s and 1880s. But also how it intertwines with the objects used in the home. The richness of the motifs and designs hadn’t been explored.

Yeah, I really thought about that when we were looking at the door hardware in your slideshow.

D’Ambrosio: The door hardware! It is fabulous and some of the best illustrations of the Japanese influence.

Did you feel that these decorative metal objects were overlooked? You were talking about the firm from which there was plenty of information on the guns they produced, but very little information on their other work.

That must have been exciting, to feel like you were launching into new territory.

You talked a little bit about household objects before the Aesthetic Movement, when these highly-decorative metals became a trend. You talked about the cast iron being the main material used before the 1880s. I was curious about what happened after. Was there a point where art brass went out of fashion?

D’Ambrosio: What this material does, I believe, is set the course for tubular metal furniture that you see in the 20th century. Base metal as a material from which to form household furnishings becomes widely acceptable. When you see tubular metal furniture, you don’t even think about it now. When you think about 20th century designers and their use of those materials, the material in the 1880s and 1890s was setting a course for what was to come.

As director and chief curator of the Munson-Williams-Proctor Arts Institute, Ms. D’Ambrosio oversees the 19th-century American decorative arts collection. During her tenure, she has added important cabinetmakers such as Herter Brothers, Daniel Pabst, Kimbel and Cabus, and Charles Rohlfs, to the collection, as well as significant examples of silver by Tiffany & Co., Gorham Manufacturing, and George Sheibler. Ms. D’Ambrosio also curated the 2005 exhibition A Brass Menagerie: Metalwork of the Aesthetic Movement.

Top image: Mantelpiece in the Driehaus Museum (detail). Photograph by Alexander Vertikoff, 2011.
All other images are courtesy of the Munson-Williams-Proctor Art Institute.