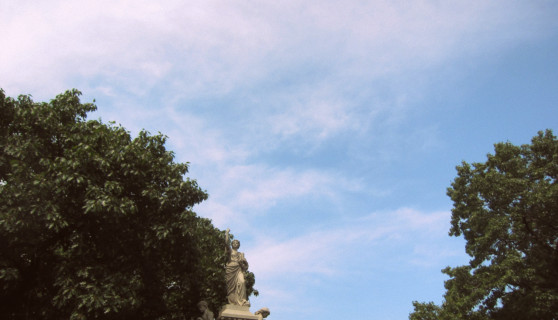 The land allotted for Graceland Cemetery in 1860 was well above Chicago’s northernmost dotted line, by about two miles: a suburban ‘new city of the dead,’ as they called it. (The recently-exhumed Lincoln Park being the ‘old’ city of the dead in that scenario.) Surrounded by the Al Capone-era buildings and occasional spray paint-tagged wall of Uptown today, Graceland still retains that meandering, pastoral, plenty-of-room-to-spread-out feel it had back in the 19th century, when its trees and rolling hills made it the perfect final stop for many of Chicago’s greatest citizens on their way to paradise.

Curved asphalt pathways take you from the cemetery’s main entrance at the south end, through manicured grounds, leafy trees, and high-rise Egyptian obelisks, and into the north end, where many of the burial sites of Chicago’s magnates, politicians, and architects are concentrated near a quiet lake. Graceland’s parcel started at only 70 acres (today it envelops almost 120), and once you’re within the red-brick walls even Clark Street goes quiet; it’s all grass and stone and sky.

I went on a sunny stroll there one recent Saturday afternoon. Graceland is open from 8 a.m. to 4:30 p.m.; accustomed as I was to the GATE CLOSES AFTER SUNSET sign hanging at the entrance to my hometown cemetery, this was my third trip to the famed site but my first time actually getting in. My  checklist included the burial sites of Daniel H. Burnham, Lucius Fisher, Marshall Field, Louis Sullivan, Ludwig Mies van der Rohe, Potter Palmer, and George Pullman.

Even if you don’t know your Pullman sleeper cars from Palmer’s Gold Coast developments, the cemetery is at least a tour of Where Our Street Names Come From: Kinzie, Wacker, Kimball, Clark, Altgeld, Honore, and Wilson all rest here.

Being a cemetery, after all, Graceland isn’t always the perfect picture of Victorian gentility—it has its spooky moments, too. In fact, one of your first sights is also the scariest (and most intriguing). Just take the path called Main to the right after the entrance and then, before hopping on Center Avenue’s left fork to head north, go a few steps right instead and freeze before the Graves monument. The tall human figure, cloaked in heavy, aging bronze, was entitled Eternal Silence by its sculptor Lorado Taft, but its hooded face and penetrating stare reminds one of Death himself. If at that exact moment the Red Line train happens to screech and rattle by, you might think you’ve just stumbled into a horror movie’s climactic moment.

Speaking of scary, I’ve been told by a friend whose apartment windows overlook Graceland that not a few among the city’s hundreds-strong coyote population reside there. And coyotes aren’t the only wild animals who like it in Graceland. In 1897, a hyena named Jim escaped Lincoln Park Zoo and spent some happy, albeit somewhat hounded, freedom among the mourners and would-be captors in the cemetery (who were after the $25 reward offered by the park commissioners). “So,” the Tribune reported, “there was scarcely a child from Lincoln Park to Edgewater who ventured beyond its parental threshold the whole day.”

On to the other grave sites:

The iconography on the pyramid monument of Peter Schoenhofen, a wealthy brewer, drew me to its doorstep (so to speak). An asp curls its way around the door handle, a threat of poison warding off those who would disturb Schoenhofen’s rest, and to look right is to find oneself nose-to-nose with the stern, surprisingly modern face of a Sphinx. On the left, a Victorian angel looks skyward, ignoring the impending riddle war.

Schoenhofen’s Egyptian-style monument was designed by Richard Schmidt in 1893.

As far as winning-by-pure-height goes, the long, lean Grecian Corinthian column of the Pullman memorial etches itself out against the sky, tall as a tree. Although the man’s body is famously buried in a lead-lined casket for fear of desecration by one of his workers, the memorial invites one to sit on one of two granite benches near where Pullman’s body lies. One-upping him in extravagance is the nearby Palmer memorial, an open-air Greek temple resting on the peaceful south end of the cemetery lake.

Eight feet beneath the monument, Pullman’s coffin is lead-lined, covered in asphalt, sunk into a big concrete block, and topped with railroad ties and more concrete. The infamous Pullman Strike happened just a few years before his death, and the memory of his angry workers apparently didn’t fade fast.

The temple where Potter and Bertha Palmer lie was designed by the New York architectural firm McKim, Meade & White.

Looking back at the bridge leading to the Burnham plot.

On the way back to the south end, I found the monument of Lucius George Fisher—the second occupant of the Nickerson Mansion, —near the matching gravestones of the Glessners, whose former house has also become a museum in Chicago’s Prairie Avenue District. Also sighted: Edith Rockefeller McCormick, once an inhabitant of the McCormickville neighborhood where the Driehaus Museum still stands, Marshall Field and family, the gorgeous Louis Sullivan-designed Getty tomb (not pictured), Louis Sullivan’s grave, Ludwig Mies van der Rohe’s appropriately minimalistic stone (not pictured), and many more.

Edith Rockefeller McCormick (1872-1932). Her house was in (and was thus one of the reasons for the nickname) McCormickville, just a few steps away from the Driehaus Museum.

Marshall Field, known for his department store of the same name.

The Field monument was designed by architect Henry Bacon and created by sculptor Daniel Chester French, both of whom would go on to create the Lincoln Memorial in D.C. The figure is titled Memory.

The epitaph on architect Louis Sullivan’s (1856-1924) grave reads, “By his buildings great in influence and power; his drawings unsurpassed in originality and beauty; his writings rich in poetry and prophesy; his teachings persuasive and eloquent; his philosophy where, in “form follows function,” he summed up all truth in art, Sullivan has earned his place as one of the greatest architectural forces in America. In testimony of this, his professional and other friends have built this monument.”

Graceland, with its natural and built beauty, is a well-preserved Chicago treasure. When the pastor of Second Presbyterian Church spoke at the 1860 dedication, a reporter covering the public event waxed poetic, gathered as he with the others

…on this lovely plot, under this beautiful sky, for as noble a purpose as men can assemble—to look after the interests and memories of the dead—to set apart for ourselves, when life’s busy scene is over, a silent home where we may sleep in peace until the resurrection summons—to erect on this globe that shall one day itself be buried, another vestibule of eternity.

All photos by Lindsey Howald Patton. Much information is thanks to Graceland Cemetery, as well as the Chicago Tribune‘s historical archives. The story about the hyena is from a historic Tribune article titled, “Hyena Yet in Graceland” from June 17, 1897.