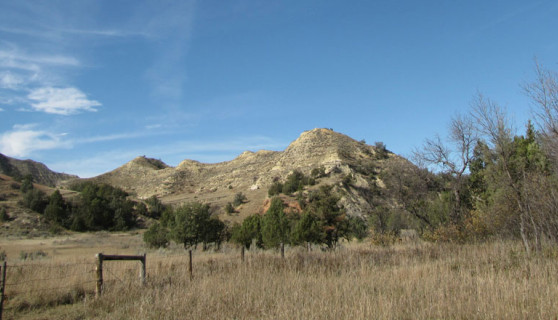 Today the National Trust for Historic Preservation released its 25th anniversary list of America’s 11 Most Endangered Places. As always the range is wide, from the country’s post office buildings to private estates like Theodore Roosevelt’s North Dakota ranch or Malcolm X’s boyhood home.

Closest to home is the Geneva, Illinois post office, the endangerment of which is due to the U.S. Postal Service neglecting to outline a clear path to future development. Post offices across the country in general are facing “uncertain futures” as more and more are decommissioned without clear plans or processes for what’s next, according to the Trust.

A number of the sites this year are not single buildings, but entire areas or groups of structures that require attention—including over 200 courthouses across Texas, several bridges in Yosemite Valley, Sweet Auburn Historic District in Atlanta, and the 195-year old Village of Zoar in Ohio.

The press release from the National Trust for Historic Preservation follows below, along with a full list of the sites:

The National Trust for Historic Preservation today unveiled its 2012 list of America’s 11 Most Endangered Historic Places®, an annual list that spotlights important examples of the nation’s architectural, cultural and natural heritage that are at risk of destruction or irreparable damage. More than 230 sites have been on the list over its 25-year history, and in that time, only a handful of listed sites have been lost.

The National Trust’s 25th annual list includes Sweet Auburn in Atlanta, the birthplace of Dr. Martin Luther King Jr., this once-thriving African-American commercial district continues to be threatened by disinvestment; Joe Frazier’s Gym in Philadelphia, longtime training center for the recently deceased boxing legend and U.S. Olympian which is currently for sale and facing an uncertain future; Historic U.S. Post Office Buildings that are threatened by a haphazard disposition process that is causing willing buyers and developers to walk away; the Village of Zoar in Ohio, a beautifully preserved historic town vulnerable to destruction by flooding if a protective levee is removed; and the Ellis Island Hospital Complex in New York, an important part of the original gateway to America for millions of immigrants that is at risk of deterioration.

“For 25 years, our list of America’s 11 Most Endangered Historic Places has called attention to threatened one-of-a-kind historic treasures throughout the nation and has galvanized local preservationists to help save them,” said Stephanie Meeks, president of the National Trust for Historic Preservation. “From Ellis Island in New York to Terminal Island in California to the beloved courthouses across the state of Texas, this year’s list reflects the diversity of America, its historic places, and the variety of threats they face. As it has over the past 25 years, we hope this year’s list inspires people to speak out for the important places in their own communities that help to define our nation’s past – and enrich its future.”

“In Texas, our county courthouses tell an important part of our state’s history.  They are centers of community life, sources of local pride, architectural treasures and in many cases, still functioning as our government buildings,” said Mrs. Laura Bush, former First Lady of Texas and the United States and Trustee of the National Trust.  “I’m proud of the work George did as Governor, which resulted in the restoration of dozens of courthouses to their former glory. And I’m pleased to see Texas courthouses back on the 11 Most Endangered Places list this year, giving us the extra boost to complete the restoration of these Texas treasures.”

Members of the public are invited to learn more about what they can do to support these 11 historic places and hundreds of other endangered sites at http://www.PreservationNation.org/places,

The 2012 list of America’s 11 Most Endangered Historic Places (in alphabetical order):

Bridges of Yosemite Valley, Calif. – A proposed National Park Service management plan for the Merced River, which flows through the heart of Yosemite National Park, would leave three historic Rustic Style bridges in danger of removal—despite their significance to the park’s treasured landscape.

Ellis Island Hospital Complex, New York Harbor, NY and NJ. – Ellis Island was once known as an “Island of Hope” for immigrants who launched new lives in America, but the hospital and support structures on the Island—once comprising the largest U.S. Public Health Service institution in the country—are now dilapidated and threatened by lack of funding.

Historic U.S. Post Office Buildings – From coast to coast, historic American post office buildings are facing uncertain futures. Due to the U.S. Postal Services haphazard disposition process, developers and others interested in purchasing and rehabbing these historic buildings end up walking away after failing to get timely or clear answers from the Postal Service.

Joe Frazier’s Gym, Philadelphia, Pa. – The gym where boxing legend Joe Frazier trained for his victorious bout against Muhammad Ali is currently for sale, unrecognized and unprotected by local or national preservation designations.

Malcolm X-Ella Little-Collins House, Boston, Ma. – Built in 1874, this modest structure is the last known surviving boyhood home of Malcolm X.  Largely unused for over 30 years, plans are in development to rehabilitate and reuse the deteriorating property as living quarters for graduate students who are studying African American history, social justice, or civil rights.

Terminal Island, Port of Los Angeles, Calif. – Terminal Island was a major shipbuilding center, the place where America’s tuna canning industry came of age, the site of the forced removal of nearly 3,000 Japanese-American residents in 1942, and is now a popular setting for movie and TV productions. This site is threatened by continued neglect due to long-term vacancy of the historic buildings, and a proposed plan that limits reuse of the buildings and, in some cases, calls for their demolition.

Texas Courthouses – Texas’ 244 courthouses serve as important architectural and historical records of the state’s past. Physical deterioration outpaces the availability of public funds necessary for courthouse restoration and revitalization, and competing needs for limited revenue challenge their future.

Village of Zoar, Ohio – This 195-year old Village in Northeast Ohio was founded in 1817 by religious separatists fleeing Germany. Remarkably intact, the Village is threatened by the potential removal of a levee that could lead to massive flooding or require demolition of much of the town.