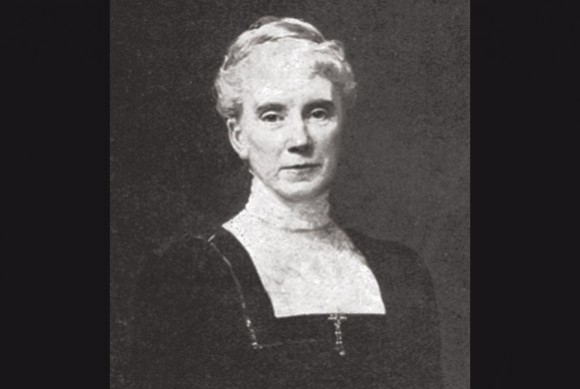 Mr. Nickerson’s bearded likeness is the only one of the family that, at the moment, graces our historic photograph gallery, leaving visitors wondering: What about Mrs. Nickerson?

As far as looks go, here she is in a 1901 oil painting by Raimundo De Madrazo: Mathilda Pinkham Nickerson. The painter, well known for portraits depicting those in the upper reaches of society, captured Mrs. Nickerson at 64 years old with an expression of dignity and gentleness.

Mathilda was a cousin of Samuel’s, the daughter of Isaac and Eunice Crosby and born in Brewster, Massachusetts in 1837. She married Samuel in 1858, and it was thanks to her father that Mr. Nickerson got his start here in Chicago—a liquor distiller, he gave Samuel a leg-up into the business during his first years in the city.

Mrs. Nickerson, like many other women in her social class during the Gilded Age, focused her attentions on the household—supervising domestic staff and determining menus, flower arrangements, interior decorations, and dress for formal receptions and dinners at the mansion.

But perhaps more interestingly, one surviving anecdote shows her to be a woman of some mettle. The Nickerson mansion was robbed back in 1899 to the tune of $400 of gold and silver amulets, curios, and jewelry. Two thieves jimmied one of the first-floor windows open at two o’clock in the morning and slipped in, escaping notice of the night watchman. The Tribune reported:

At the time the robbery was committed Mr. and Mrs. Nickerson were asleep on the second floor, and the servants on the third. Mrs. Nickerson was awakened at 3 o’clock by the night watchman, who found the front window wide open and rang the door bell. She did not stop to discover whether the thieves were still inside the house or to awaken her husband, but she told the night watchman to stand outside and shoot the robbers if they ran out, while she went in search of them herself.

—from Chicago Daily Tribune, February 23, 1899, page 5. “Rob the Nickerson Home: Thieves Invade Residence of National Bank President. Use a Jimmy at 2 in the Morning to Gain Access Through Windows Supposed to Be Burglar Proof — Prowl Around by Candle Light and Abstract $400 Worth of India Curios — Leave the Ivory Carvings and Jades.”

Her bravery is likely due to the fact that she was the great lover of art in the family; she apparently wasn’t going to let it go without a fight. She didn’t catch the thieves—they had already slipped out—but their impressive art collection, even missing these pieces,, remained one of the best in the Midwest. Mrs. Nickerson was the one who orchestrated the gift of that collection to the Art Institute of Chicago in 1900, and even after moving back East, she made regular visits to Chicago to personally supervise the cleaning and rearrangement of the collection, which was displayed as a whole. According to an Art Institute bulletin distributed just after her death in 1912, she was one of the institution’s “best friends. … Her presence was always most welcome.”

One response to [You Asked] What Was Mrs. Nickerson Like?