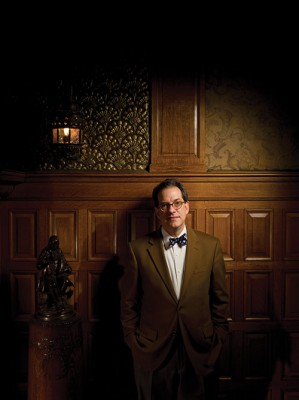 [Q&A] with Ulysses Grant Dietz of the Newark Museum

On April 18 and 19, Ulysses Grant Dietz—the Senior Curator and Curator of Decorative Arts at the Newark Museum—visited the Museum to deliver two talks entitled Beauty, Money and Power: The Transformation of Taste in America’s Gilded Age. After he entertained audiences with his insight, knowledge of that era’s decorating tastes, and self-deprecating wit, we caught up with Mr. Dietz to rehash his topic.

This topic was in preparation for an exhibition you have coming up, is that correct? Tell me a little bit about that.

Ulysses Grant Dietz: Well, the title of my talk was part of the title of this exhibition, which is tentatively called Mansions & Millionaires: Beauty, Money, and Power in America 1865 to 1917. And—you want me to go on?

Yeah, yeah, that would be great.

Dietz: Okay. [Laughs.] And what it purports to do is, rather than studying the Aesthetic Movement or the Arts and Crafts movement or a specific artist or architect or furniture maker, it looks at the totality of the object in the context of the interiors of the very rich from the emergence of the Gilded Age after the Civil War to the end of the Gilded Age at World War I. And what I am trying to document is the phenomenon of the rise of the mansion, but also the equally important but never, ever discussed phenomenon of the complete reinvention of the concept of taste in a way that had never happened in human history before, in the early 20th century. It happened all over Europe as well, but it’s particularly profound in the U.S. in that the modern, Victorian aesthetic of the Gilded Age—this eclecticism, this experimentalism, this very conscious creation of an ‘American rich’ look by borrowing bits and pieces from the rest of the world—is completely overturned and thrown into shadow and discredited as bad—morally, aesthetically, politically bad—in the early 20th century and is replaced with a very self-conscious, un-American, aristocratic, isolationist style that is based on 18th-century or earlier aristocratic Europe. Or let’s just say it begins with Napoleon and works its way backward.

I think a lot of people were surprised to hear you call the Nickerson mansion “modern.”

Dietz: I know, no one ever does that! But then you look at a house like Rosecliff in Newport—or, even better, the Elms, which is essentially a copy of an 18th century French chateau full of either real or copies of 18th-century French objects. And that becomes the norm for the very rich. It’s a very conscious statement saying, ‘This Victorian look is bad. It’s to be rejected and to be buried.’

“This eclecticism, this experimentalism, this very conscious creation of an ‘American rich’ look by borrowing bits and pieces from the rest of the world is completely overturned and thrown into shadow.” Frank Lloyd Wright’s Moore-Dugal Residence in Oak Park, Ill., 1895. via

“Essentially a copy of an 18th century French chateau full of either real or copies of 18th-century French objects.”
The Elms, Photo by Andrea Poe for the Washington Times

One of the things you said in your lecture was this idea of the Gilded Age being split in half. Most people think of it as one complete era. And so to have the first half of the period embracing the modern and then the second half embracing the antique and the more copyist style, that was a new and interesting idea.

Dietz: Good, I’m glad. Because there are all sorts of sub-issues that will come into this. The other thing, which came up in my second lecture, is permanence. That we fulfilled A.J. Downing’s darkest fears in the Gilded Age by building these great houses, because he knew that we would never hold onto them. That we would abandon them. That this was an incredible waste of money because we would do this, and after a generation it would all be chucked.

And why do we chuck them?

Dietz: I don’t know. That’s the trick. I mean, there’s certainly peer pressure, and there’s sort of, ‘I have so much money I can do this.’ But even if I had a lot of money, and I’m a total materialist, I wouldn’t build a huge house. I might buy an old house. I might buy the Nickerson House and restore it, but I’d live in it. [Laughs.] So that instinct totally makes sense to me, but the idea of building a brand new, 50,000 square foot house doesn’t make any sense at all! But the main thing is just what you said, is this dichotomy between what seems to be a linear progression forward to good taste, which is the way it’s always been presented, is in fact not a linear thing at all, but a complete reversal.

And one of the reasons that you identified for that was that you had this extremely, extremely wealthy class trying to differentiate themselves somehow from the middle class.

Dietz: Well, and that’s it. That’s my theory, that the modern mode was being manufactured at all levels. The anti-modern, antique mode is inherently so expensive and because of that it can’t be created at all social levels. It’s consciously aristocratic, which is consciously isolating from everybody else. The irony is, of course, that it got adapted in our American culture. We, the middle class, rejected modernism too in America. You know, technology we embraced completely. That’s the bizarre thing. Disposal, the dishwasher, the steam iron, all of those things, we had that technology first and developed it first, but that’s only function. Aesthetically, we fought modern. I mean, the Nickerson house was totally cutting-edge technologically. The Breakers and Marble House, those houses are like office buildings. They’re so slick and modern and technologically advanced, but you don’t know that. It’s all hidden under this anti-modern dress.

It seems like a very convenient next step for antiques to be the thing that gives you status, because those have this measure of authenticity, they have to come from a certain period of time in order to lend that status. So it is more rarified.

Dietz: Right. And then it seems what triggers this among the very rich is not just that they want to separate themselves from the middle class, that instinct I think is there, but there’s also this sense of shame. They do it because they are made to feel ashamed that this newness is vulgar. Anybody with money can buy anything new, but you have to be a connoisseur to buy something old and understand it. There’s a lot of evidence that people like [Henry C.] Frick and [Henry E.] Huntington didn’t really know anything. They went to experts and bought what they were told to buy, because it made them look good. In the early 19th century Americans didn’t care about art. But by the time the Gilded Age got moving, if you were going to be upwardly mobile you had to at least pretend to care about art. It’s a real Gilded Age phenomenon. So you get these rich people with their huge houses like Eva Stotesbury in the 1920s. It was this huge English pile in Pennsylvania full of 18th century stuff. She gave tours of her own house, and she had these docent manuals so she could tell people what things were. There’s no passion there, it’s all social climbing.

“She gave tours of her own house, and she had docent manuals so she could tell people what things were.”
A fountain on the former estate of Edward and Eva Stotesbury, called Whitemarsh Hall. via

“There was a whole 40-foot long Louis Tiffany glass screen that Teddy Roosevelt had smashed up and thrown into a landfill.”
Digital reconstruction of the White House’s Blue Room, designed by Louis Comfort Tiffany, circa 1886 via WhiteHouseMuseum.org

Is it true that Teddy Roosevelt had the Tiffany furniture from the White House thrown in the trash at the beginning of the 20th century?

Dietz: Well, I don’t know if it went literally into the Dumpster. I suspect—and I like to fantasize—that the furniture’s out there. There was a huge sale of hundreds of objects that came out of the White House when Stanford White oversaw the renovation and redecoration. Things were sold off, including many of the Victorian things from the state rooms. But there was a whole screen, a 40-foot-long Louis Tiffany glass screen, that Teddy Roosevelt had smashed up and thrown into a landfill.

Dietz: And that’s in 1902! Tiffany was still at the top of his game then. It’s really appalling. And Roosevelt himself lived in a very Victorian house, but the power people of America lived in these anti-modern palaces, so the White House had to look like that. But if you go to Sagamore Hill, which was his house, it’s the biggest hodge-podge of Victorian nonsense you’ve ever seen, because they were an old family, and that was old money, and you didn’t just throw things away if you were old money. It’s new money that throws everything away and gets more new stuff, so. [Laughs.]

Dietz: Yeah, I think we do that with increasingly short leaps. Now, as you said that the thought jumped into my mind—Louis Tiffany adapted. He did lamps, he did glass, he did all this stuff, but he continued to have a decorating firm that did Colonial Revival interiors. So he didn’t disappear, he adapted. And that’s why it’s so fascinating, because he was an Aesthetic Reform movement decorator, and then an Arts and Crafts movement decorator, and then an anti-modern Colonial Revival decorator. Herter Brothers actually did all of the draperies and the wall fabric for Teddy Roosevelt’s White House. And Marcotte, the great Gilded Age furniture-maker, made all the reproduction-French furniture for the White House. So they’re part of this, too. They all capitulate and they all change.

Ulysses Grant Dietz is the Senior Curator and Curator of Decorative Arts at the Newark Museum in New Jersey. With a specialty in American material culture and decorative arts, Mr. Dietz has been the curator of over 100 exhibitions covering all aspects of the decorative arts, from colonial to contemporary. He is particularly proud of his work on the Museum’s Gilded Age-era (1885) John Ballantine House, named a National Historic Landmark in 1985. The Ballantine House was transformed and reinterpreted between 1992 and 1994. The museum’s exhibition concerning Gilded Age wealthy tastes is planned for fall 2015.