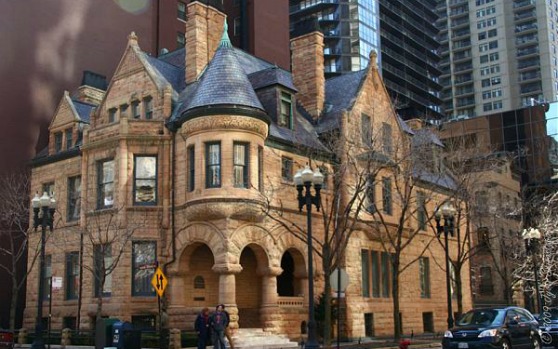 [You Asked] What is That Other Mansion?

What is the story behind the peach-colored mansion catercorner to the Driehaus Museum?

On the southwest corner of Erie Street and Wabash Avenue is our co-remnant of another time, the Ransom Cable mansion, an 1886 landmark designed by the renowned architect Henry Ives Cobb. Its distinct peach-pink façade is Kasota stone, a sedimentary rock from the upper Midwest. That soft, radiant hue, along with steep gables and abundant ornamentation, are distinct contrasts to the sterner gray of the Samuel M. Nickerson Mansion on the opposite corner. The Cable house’s exterior, while in silhouette hinting at Queen Anne styles, mostly exhibits the Romanesque Revival style for which famed architect H.H. Richardson became known; the building is therefore typically classified as Richardsonian Romanesque.

Ransom Reed Cable (1834-1909) commissioned the mansion from the firm Cobb & Frost in 1885. Cable (perhaps the most aptly named railroad executive of all time?) served as president of the Chicago, Rock Island & Pacific Railway for 15 years. (A tidbit of industry gossip: the great William H. Vanderbilt, the largest stakeholder in the competing Chicago and Northwestern Railroad, apparently tried to jump in and block Cable’s appointment to the position.) Before the railway company, Cable—who grew up in Ohio—did business in the coal mining industry in Rock Island, a town on the Iowa-Illinois border. The Chicago Tribune called him one of “the representative businessmen of Chicago.”

The building’s second tenants compete with Cable for historical importance. John Carroll, one of Chicago’s first undertakers, personally drove the horse-drawn hearse carrying President Abraham Lincoln on a mournful procession through the Chicago streets and down into Springfield. It is his funeral business—John Carroll Sons, well-known for the burial of other great figures like George Cardinal Mundelein, an archbishop of Chicago—that occupied the Ransom Cable mansion for much of the 20th century after Cable’s death.

Today the Ransom Cable mansion is home to Driehaus Capital Management LLC. Though it is not open to the public, passers-by will be glad to know that the exquisitely-restored exterior is the best part for sightseeing—the interiors do not have their original features intact.