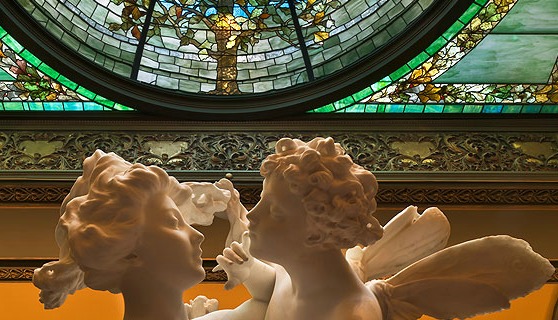 [From the Collection] Cupid and Psyche

The largest marble sculpture in the Driehaus Museum, Cupid and Psyche commands the center of the mansion’s original domestic art gallery.

With its placement at the conclusion of the first floor’s interconnected west rooms, Cupid and Psyche hints at a similar (in size and style) sculpture which Samuel M. Nickerson displayed in the same room during the late 19th century. Nickerson’s sculpture, in order to align with the center of the hallway created by opening all the pocket doors separating the parlor, drawing room, and library, sat a few paces east of the center of the room. Cupid and Psyche has been placed with respect to the center of the gallery itself, however, and stands directly beneath the apex of the gorgeous stained glass dome the Nickerson mansion’s second owner commissioned in 1900.

The Italian—Venetian, to be more specific—sculptor Oscar Spalmach (1864-1917) crafted the piece from white marble in the late 19th century when he was working in Orazio Andreoni’s studio in Rome.

Here’s Cupid and Psyche’s tale, my abbreviated version, from the second-century legend by Apuleius:

Venus, ever the jealous goddess, despises the human Psyche for her beauty and sends her son Cupid to prick her with one of his arrows, which cause a person to fall in love with the next one she sees. Venus was hoping to make Psyche fall in love with something awful and eliminate her as competition. Cupid accidentally pricks himself, however, and winds up madly in love with the woman as he watches her sleep. Later in the story, he sleeps with her nightly but always in the dark so she can’t discover his true identity. Of course, she is tempted to find out and eventually does, and he flees, but by now she has been also pricked by an arrow and is desperately in love with him. Then she has to go through a series of heroic challenges, including visiting the underworld, and thanks to Venus’s conniving ends up falling into a Sleeping Beauty-like sleep from which Cupid has to revive her. In the end Jupiter (Greek: Zeus) steps in and validates the marriage between Cupid and Psyche, makes the girl immortal, too, and Venus has to pretend to be excited about her new daughter-in-law.

The depiction of Cupid as a putto in Spalmach’s work, with tiny wings and a toddler’s chubby body, is unusual. Cupid was a full-fledged, man-shaped god—albeit with wings—and most other artistic interpretations of the tale have Cupid shaped as sufficiently manly to justify the love affair he conducted with Psyche. Putti are different creatures altogether, bacchic little beings. Though they sometimes are mistaken for cherubim and were used in an ambient religious way by Renaissance artists, when used properly in older iconography they represented passion and human love (eros, that is—so the leap is not so great from Cupid to a putto).

These and below are great examples of more common depictions of the love affair. For many, many more depictions of Cupid and Psyche in art, Rutgers University has a site compiling works on the subject, from the fifth century B.C. to present day.

The translated text of the myth can be found here.