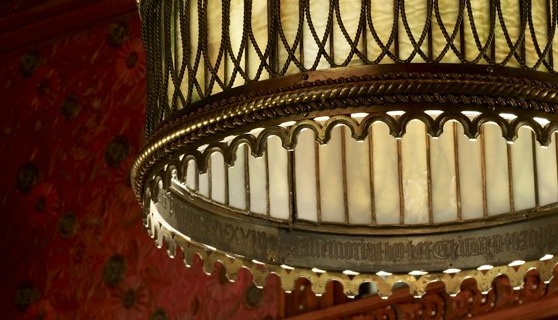 [You Asked] What is the Inscription in the Tiffany Chandelier?

What does the inscription inside the smoking room’s Gothic chandelier say?

Some of our more observant visitors have asked about a unique Tiffany Studios chandelier hanging in the smoking room, which is tucked away just to the east of the main hall doors.

A bit of background on the chandelier itself, first: the stunning Gothic Revival fixture features Tiffany’s opalescent drapery glass, a cloudy glass which comprises the wide band at the bottom of the shade’s crown-like shape; it peeks from behind gilt-bronze filigree. Golden favrile (French for handmade) glass is suspended within the frame. It comes to us from the late 19th century, purchased or comissioned from Tiffanys Studios by the children of one Mary Bliss Hodges Clark. How do we know about this Mary? Around the interior of the shade a Gothic-lettered inscription reads,

A memorial by her children to Mary Bliss Hodges Clark died January 16, 1899 in the seventy-second year of her age. “The path of the just is as the shining light,” Proverbs IV XVIII.

The full Proverb (4:18) in the King James Version of the Bible goes, “But the path of the just is as the shining light, that shineth more and more unto the perfect day.”