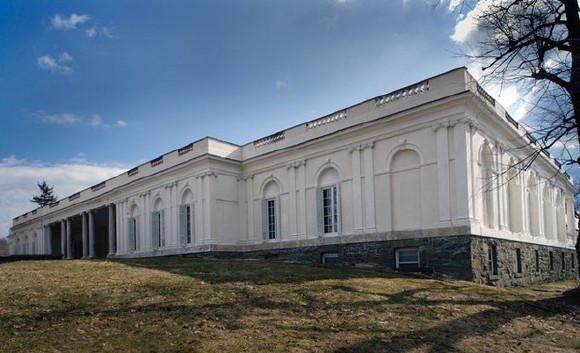 A tempting thought: Slipping into the Nickerson Mansion with a sleeping bag, claiming a guest bedroom, and making oneself at home.

There’s no need to risk getting acquainted with the Museum’s security staff, however, because Gilded Age luxury is just a call to a realtor and a signed check away. And thanks to the housing market’s recent misfortunes, many of the list prices are a steal compared to more prosperous times. Do you dream of the same treatment Teddy Roosevelt had when he commissioned McKim, Mead and White to redesign his White House? No problem. For $8.9 million, Astor Courts—designed by Stanford White of that same great 19th-century architectural firm—is yours. Want a taste of elite Rhode Island summers from days long past? There are so-called cottages on the market in Newport, too.

Gilded Age pedigree: Built in 1917 and designed by the firm McKim, Mead and White.

Exterior: Lifelong direct access to the Hudson River thanks to written permission from New York State; 50 acres with views of the Catskills; low-slung, crisp, and classical Beaux Arts exterior.

Gilded Age pedigree: The building was commissioned by John Jacob Astor IV, famous for his family wealth but perhaps even more famous as the Astor who perished on the Titanic’s maiden voyage in 1912. The architect was, again, McKim, Mead and White. Astor Courts was completed in 1904 as a sporting pavilion on Astor’s 2,800-acre property (think indoor tennis court, indoor pool, basement bowling alley, and squash courts). It was converted to a residence in 1941.

Price tag: $49 million (Central Park views are priceless, after all)

Gilded Age pedigree: It’s one of the last buildings Stanford White designed before his death in 1906, and as the house was completed in 1907 neither he nor its intended resident, the Gilded Age railroad magnate and financier Henry H. Cook (who died in 1905), saw its completion.

Exterior: Sprawling Shingle-style residence with views of the Atlantic and Frenchman Bay; tiny tea house (pictured above) perched on the rocky shoreline.

Interior: 19 rooms, 10 of which are bedrooms; heavy use of cherry, ash, birch, whitewood, and oak woods throughout, not only for the wainscoting but including a wooden dining room chandelier.

Gilded Age pedigree: Built in 1892 for John G. Moore who developed the Grindstone Neck area for high-society New Yorkers in need of a getaway.

Exterior: Palladian exterior; classical columned back porch looking out to a sleek in-ground pool, then across an expansive emerald lawn, and finally down to the waterfront; stately gated entrance; two-story carriage house with brick façade.

Gilded Age pedigree: The notable architect Horace Trumbauer, who created other legendary Newport summer estates such as The Elms, designed this stately 12,000-square foot residence and an accompanying two-story carriage house. It was completed in 1904 and originally named Claradon for owner and railroad executive Edward R. Knight’s wife, Clara.