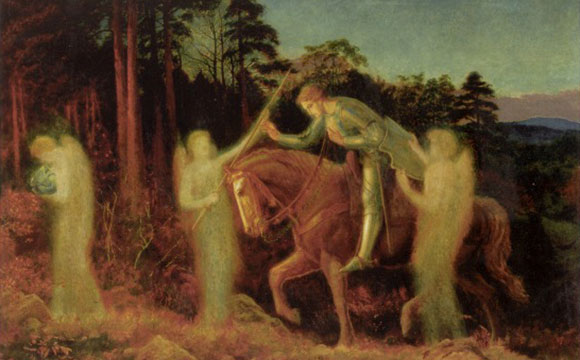 [From the Collection] The White Knight

Since summer there has been a blank spot above the Drawing Room piano just begging for a painting, and three weeks ago Sir Galahad arrived and saved the day.

This oil painting on canvas is the work of Arthur Hughes, the English Pre-Raphaelite artist. Hughes was born in London in 1832 and studied at the School of Design, Somerset House. He joined other Pre-Raphaelite artists like Dante Gabriel Rossetti and William Morris in painting a series of murals at the Oxford Union in 1857, and remained a part of that movement’s influence until his death in 1915.

The Pre-Raphaelite Brotherhood is an English movement of painters and poets who started in 1848 to bring emotion, spirituality and nature into art where they felt it had been displaced by more materialist approaches. Many of them, like Hughes, had a thing for medieval culture. It is neither the first nor the last art movement to be motivated somewhat by nostalgia, hence a moniker that means “before Raphael.”

Sir Galahad came after another, similar painting by Hughes. That first work, from 1870 (pictured below), shows the legendary Knight of the Round Table in the midst of his search for the Holy Grail, leaning somewhat wearily over the saddle of his white steed. Angels (a golden trio of them bless his quest; they also provide all of the painting’s light) hover above him as symbols of his perfect morality: “My strength is as the strength of ten / Because my heart is pure,” goes Alfred Lord Tennyson’s poem about the knight.

Perhaps inspired by the first Sir Galahad success, Hughes endeavored to paint another work on the same Arthurian theme. He actually began this particular canvas in 1862, but did not work on it seriously again until 1892 after a trip to Cumberland in the northwest of England. So inspired he was by the region, he wrote to his friend Alice Boyd at Scotland’s Penkill Castle (a favorite hangout for members of the Pre-Raphaelite Brotherhood): “It was delightful to revisit…the old landscape in Cumberland that provoked me long ago to paint Galahad, and it looked better than ever.”

The Cumberland region—its historical rural setting and verdant land—provided the background you see in Sir Galahad as well as the painting above, Knight of the Sun. The background was easy; the subject, apparently, not as much.

Initially Hughes planned for his knight to be joined by La Belle Dame sans Merci, from John Keats’s poem of the same name about a knight meeting a mysterious beauty in the wilderness. His letters to Alice Boyd reveal the trouble he had with the figure, however, and the unfinished canvas was rejected by the Royal Academy in 1894. By the artist’s posthumous studio sale in 1921 (Hughes died in 1915), the Belle Dame had been erased and replaced by the three angels we now see. The original title was also reinstated.

The finished painting evokes the same themes as the first Sir Galahad—the knight on horseback accompanied by three angels—but with differences. Here, the angels are not ethereal heavenly beings who watch without interfering, but helpful guides to the weary adventurer. Their glowing figures offer comfort, as with the third angel who places one hand on the knight’s shield while another relieves him of his spear.

The painting, as mentioned, is on view in the Drawing Room gallery on the west side of the Driehaus Museum first floor, just above the Chickering and Sons piano.